NEW YORK (CNNMoney.com) -- The dollar gained against the euro and the pound, but fell versus the yen on Monday as equities ended mixed and investors continued to worry about finding a concrete solution for Greece's mounting debt. 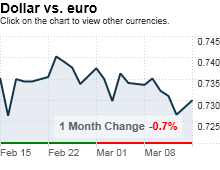 On Friday, the dollar fell against major currencies but rose versus the yen following conflicting reports on retail sales and consumer confidence.

What's moving the market: Lingering concerns about Greece's debt crisis boosted the dollar versus the euro ahead of a meeting of European finance ministers on Monday, as investors lost confidence that a solution would be reached to help the nation reduce its growing debt.

Meanwhile, the Federal Reserve said industrial production edged up 0.1% in February following an increase of 0.9% in the previous month. Economists surveyed by Briefing.com expected output to remain steady.

The Empire Manufacturing index showed that manufacturing activity dipped to a reading of 22.86 in March from 24.91 in February. Economists had forecast a drop to 22.

While the economic data released Monday was roughly in line with expectations, the economy needs to show significant signs of recovery in order for risk to fully return, said Sylvester.

"By now, people are wanting more than just mediocrity," he said. "The market wants to believe in this recovery story and that we're in that next growth phase, but until we get the data to support that, the market will remain nervous."

Stocks ended mixed on Monday as investors looked ahead to the Federal Reserve's decision on interest rates, due Tuesday.

The Fed's report will help dictate the direction of the dollar for the remainder of the week, said Sylvester.

"The market is most likely going to be on hiatus until tomorrow's rate announcement," said Sylvester. "We're not looking for any major announcements from the Fed, but scrutiny will be given to the report, and this will be the key focal point of the week."