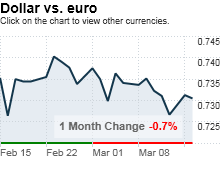 On Monday, the dollar gained versus the euro and the pound, but fell against the yen, as stocks ended the day mixed and investors continued to worry about finding a concrete solution for Greece's mounting debt.

What's moving the market: In its policy statement Tuesday, the central bank left key interest rates steady near zero and said rates should stay low for the foreseeable future.