Neuromarketers get inside buyers' brains 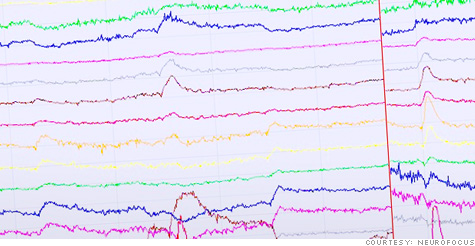 Marketing companies like Neurofocus use brain scans, like this one, to test product designs and marketing campaigns.By Rachel Kaufman, contributing writerMarch 18, 2010: 3:39 PM ET

AUSTIN (CNNMoney.com) -- Marketers want to get inside your brain. Literally.

At this week's South By Southwest Interactive Festival, a panel of scientists and advertising executives dissected the latest research on "neuromarketing": measuring consumers' brain activity to help develop ads and products.

The tactic is making headlines for big business. Frito-Lay studied women's brains to help develop an ad campaign, and Campbell Soup (CPB, Fortune 500) just unveiled a packaging redesign based on consumers' "neurological and bodily responses" to different mockups. By hooking customers up to EEG or MRI machines, a company can learn about what's really going on inside a buyer's brain -- possibly even before the buyer knows it.

But Campbell's and Frito-Lay have huge budgets; this technology isn't cheap. What about smaller companies?

But there's hope: "Increasingly, companies with less than that have been using this technology," he said. "When you have a smaller budget, every dollar should count." Companies testing a product or marketing campaign using biometrics typically only have to test a tenth of the people they'd survey in a standard focus group.

Even better, though much neuromarketing research is proprietary, some of the studies are being done at academic institutions and published in peer-reviewed journals. That means the results are open for anyone to make use of.

George Loewenstein, a Carnegie Mellon professor in the social and decision sciences department, has studied neuroeconomics and "the pain of paying." Being ripped off causes actual, physical pain, he found. Test subjects hooked up to MRI scanners were asked to purchase a series of products, some overpriced, some a good deal. The subjects' pain centers lit up when they saw the too-expensive products.

But isn't that obvious? That your customers don't want to buy things they believe are overpriced?

Not all neuromarketing results are common sense, said Roger Dooley, a marketing consultant and primary author at Neuromarketing. For example, an appliance maker considering adding a new feature to one of its products conducted a focus group to ask women if they liked the new feature. Most of the focus group participants said they liked it, but by studying the participants' faces in detail, the company learned that almost 4/5 of the test subjects actually disliked the feature.

And neuromarketing scans are very good at pinpointing exact points of reaction. Pradeep cited a study for an unnamed company that makes chips and salsa. They found that the moment a snacker lifts a salsa-covered chip to his mouth, before taking a bite, "that moment is extremely evocative for the brain. Your brain just goes nuts."

That has lots of implications for salsa design. "Too chunky won't work, and too runny won't work," Pradeep said. "Why do you need complex science to design the liquidity of a salsa? That's what Steve Jobs does. Every little thing counts to create a phenomenal experience."

Ad psychology, a related field to neuromarketing, deals with principles that seem less abstract: sex sells; more expensive brands tend to be perceived as "better." But recent neurological studies are deepening marketers' understanding of why such techniques work.

"In other words, they didn't think it tasted better, it actually was tasting better," Dooley said.

Science can't do everything yet, though, so entrepreneurs take note: Neuromarketing is good at measuring the effectiveness of things we already have. It's not good at coming up with anything new.

"Who would have thought that people would buy pet rocks?" said Gary Koepke, cofounder of ad agency Modernista. "The Snuggie? I don't know if neuromarketing would have figured that out. There's a lot of things up for grabs in this world yet."

How to innovate: A step-by-step guide