Dollar up on euro as Greece woes resurface

NEW YORK (CNNMoney.com) -- The dollar rose against the euro and the pound Thursday following economic reports from the government and amid renewed concern over Greece's debt. 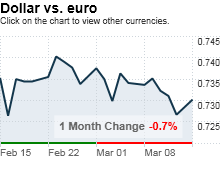 On Wednesday, the dollar slipped versus the yen and pound but rose against the euro after the Bank of Japan and the Federal Reserve each left interest rates unchanged near zero.

What's moving the market: The euro sank versus the dollar after Greece warned that it will have to turn to the International Monetary Fund for aid if the European Union doesn't agree on a plan next week, worrying investors that a concrete solution for the country's debt still hasn't been found.

"There's prominent backpedaling by European countries about a bailout for Greece," said Brian Dolan, a chief currency strategist at Forex.com. "It's not so much a case of dollar strength today as it is euro weakness."

The Labor Department said the number of Americans filing for unemployment insurance dropped by 5,000 last week to 457,000, from a revised 462,000 in the previous week.

Separately, the Consumer Price Index (CPI), the government's key inflation measure, was unchanged in February as lower energy prices offset increases in prices of food and other items.

The CPI was expected to edge up 0.1%, according to a consensus estimate from Briefing.com. February's low rate of inflation supports the Federal Reserve's decision to hold key interest rates steady near zero.

What analysts are saying: While Greece's debt crisis has been weighing on the euro lately, Dolan doesn't expect the currency to remain weak for much longer.

"We could see some of the clouds above the euro begin to lift," he said. "At the end of the day, someone's going to bail out Greece."

Dolan said he predicts the dollar will edge lower against major currencies until the U.S. recovery shows more convincing signs of improvement. But once investors become more optimistic about the economy, the dollar will rebound.

"Once it becomes more apparent that the U.S. recovery is strengthening while others are stagnating, the dollar's going to come back," he said. "And the Fed is going to be seen as the first of the major central banks to raise rates, which will be a major driver for dollar strength."

Fed should monitor all banks

How high will yields go?

Help Desk
Track testing tires to find the best
Find out how TireRack tests and reviews tires and why choosing the right ones for your car is so important. Play
Markets
Data as of 9:57am ET
Data as of 2:44pm ET
Sponsored by
Sections