NEW YORK (CNNMoney.com) -- Stocks gained Monday, with health care shares leading the way as Congressional approval of a sweeping reform bill removed the uncertainty that has surrounded its passage for months. 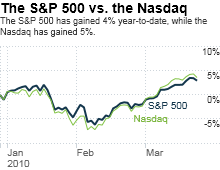 Stocks fell in the first minutes of the session on renewed questions about Greece's ability to repay its debt. But the market soon erased losses and turned higher as investors began snapping up biotech, health care provider and hospital sector stocks in the wake of the House of Representatives' approval of the health care bill.

Many of those stocks have been stuck in narrow trading ranges over the last year amid questions about the breadth of any bill and whether or not Congress would approve it. But the removal of that uncertainty seemed to help lift the stocks beyond those ranges.

"The bill is being received well so far, but we have to see what comes out of it down the road," said Stephen Carl, head equity trader at Williams Capital Group.

He said it is too soon to determine exactly how it might impact different sectors and groups.

Some concerns about Greece lingered after reports showed that influential member nation Germany might not go along with European Union efforts to help the country cut down its debt. But those concerns were overshadowed by the focus on health care.

Stocks slipped Friday at the end of another up week for stocks. The Dow, Nasdaq and S&P 500 have all advanced in four of the last five weeks. All three major indexes ended at roughly 18-month highs in Thursday's session.

"We're seeing a little euphoria now, but it could level off to the downside in the short term," said Carl. He said that markets will have a better sense of direction after the release of the economic news due later this week, including the existing home sales index on Tuesday and the durable goods orders report on Wednesday.

After the close, the Senate Banking Committee approved a regulatory reform bill put forth by Sen. Christopher Dodd, D-Conn., passing it on to the full Senate for the vote.

The broad-based bill will extend coverage to 32 million more people, require all Americans to have coverage, and will prevent companies from denying coverage based on pre-existing conditions. Medicare prescription drug coverage will be expanded and people will be given subsidies to help pay for insurance.

The bill is expected to cost $940 billion over 10 years. (For highlights of the plan, click here.)

Google: The company said Monday that it is redirecting users of its China search engine to its Hong Kong search engine as a means of providing uncensored content.

However, Google said it was going to continue its research and development work in China and maintain its lucrative ad sales business.

The U.S. company said in January that it was no longer willing to censor its Chinese engine and that it would pull out of the country unless a solution could be reached. The announcement followed a cyberattack on e-mail accounts that targeted human rights activists.

The dollar and commodities: The dollar fell versus the euro and the yen.

U.S. light crude oil for April delivery rose 57 cents to settle at $81.25 a barrel on the New York Mercantile Exchange.