NEW YORK (CNNMoney.com) -- The dollar gained Tuesday as investors worried that an agreement on a rescue package for Greece would not be reached at this week's European Union summit. 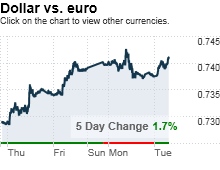 If a sufficient aid package isn't offered to Greece, Prime Minister George Papandreou said he will turn to the International Monetary Fund for assistance.

News reports Tuesday said that German and French leaders had already agreed to let Greece turn to the IMF for help, causing the euro to plunge.

As investors awaited the summit of European Union leaders on Thursday, a government report on the U.S. housing market was the center of attention Tuesday.

The National Association of Realtors said existing home sales fell to an annual rate of 5.02 million units in February, slightly better than expected.

Economists surveyed by Briefing.com had predicted sales to have edged lower to an annual rate of 5 million units last month, from 5.05 million in January.

What analysts are saying: Greece's debt crisis has helped lift the dollar over the past month or so, and the euro will likely remain under pressure until a detailed fix is found, said Meg Browne, a senior currency strategist at Brown Brothers Harriman.

"A solution could provide some temporary relief," she said. "But ahead of the summit, the question is, will it really help Greece in the long run? The proof will come with time and as Greece continues to address its problems, but there are other countries as well that have issues, so does a solution apply to them as well?"

Browne said she expects the dollar to continue to gain strength against the yen and pound over the course of the year.

However, the dollar's rise may be hindered if the U.S. economy shows signs of a lagging recovering. If unemployment fails to stabilize or the housing market remains weak, the dollar could be knocked lower, she said.

Stocks set for a higher start

5 next steps for health care

Help Desk
Track testing tires to find the best
Find out how TireRack tests and reviews tires and why choosing the right ones for your car is so important. Play
Markets
Data as of 1:29am ET
Data as of Jan 17
Sponsored by
Sections