NEW YORK (CNNMoney.com) -- The dollar climbed to a 10-month high versus the euro on Wednesday amid growing concern about struggling European nations.

What prices are doing: The dollar climbed 1.3% versus the euro to $1.3320, the highest level since May 2009, said Brian Dolan, a chief currency strategist at Forex.com. 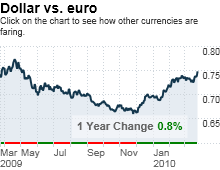 On Tuesday, the dollar was lifted against major currencies as investors worried that an agreement on a rescue package for Greece would not be reached at this week's European Union summit.

"A sizeable fiscal shock against a backdrop of relative macroeconomic and structural weaknesses has reduced Portugal's creditworthiness," Douglas Renwick, associate director of Fitch's Sovereign team said in a statement Wednesday.

Worries about financially troubled European countries such as Portugal, Ireland, Italy, Greece and Spain, often referred to as the "PIIGS" nations, have pressured European markets lately and caused investors to turn to the dollar as a safe haven.

Portugal's downgrade comes after reports that Greece may have to turn to the International Monetary Fund for aid, signaling that the debt-ridden nation will be unable to find a solution to its problems on its own.

Therefore, adding Portugal's downgrade to the list of euro zone woes does not bode well for the currency, said Dolan.

"This is another nail in the coffin," he said. "It also revitalizes speculation that other euro zone countries may be downgraded as well, with Spain next in line, so we're looking at a further spread of the contagion."

Durable goods excluding autos rose more than expected, edging up 0.9% after falling 1% in January. Economists were predicting an increase of 0.3%.

What analysts are saying: "The dollar is benefiting greatly from the distress in the euro zone," said Dolan. "It's basically a safe haven flow right now that's driving the dollar higher."

Even if Greece eventually receives financial assistance to lower its mounting debt, the euro's problems won't end there, said Dolan.

"The euro is now being questioned on an institutional level as to whether it can survive this whole fiscal situation," he said. "And when things really look difficult for the euro, the dollar is going to be the primary beneficiary."

Therefore, looking ahead, Dolan expects to see the dollar continue to strengthen versus other currencies as euro zone problems persist and the U.S. economy improves.

"The U.S. recovery is showing signs of picking up steam," he said. "Contrast that with a relatively sluggish recovery in Europe and the U.K. and Japan, and you'll have the dollar benefiting."