NEW YORK (CNNMoney.com) -- Treasurys rose Wednesday after a report showed an unexpected decline in jobs, pushing investors to pull back on riskier assets and turn to the safety of government debt. 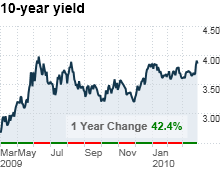 Though the decline was the smallest since February 2008, it surprised economists, who were expecting employers to add 40,000 jobs during the month.

The unexpected drop prompts investors to doubt the upbeat estimates for the March employment report due Friday from the Labor Department.

Economists expect employers added 190,000 jobs during the month, which would be the biggest gain since March 2007.

What investors are saying: "Investors are focusing on employment data and are trying to gauge what might come out at the end of the week," said bill Larkin, portfolio manager at Cabot Money Management. "The disappointing ADP report added money into Treasurys."

But Larkin warned Treasurys could lose steam ahead of Friday's jobs report.

"The economy has been gradually improving, and investors know that employment will be the last phase," he said. "Even if we see nominal employment growth, the Federal Reserve could lift interest rates from zero, and that will spark inflation fears among investors."