NEW YORK (CNNMoney.com) -- The dollar dipped against major currencies on Wednesday after a disappointing report on private-sector payrolls. 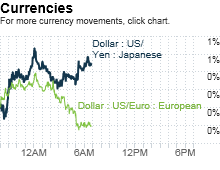 What's moving the market: Prices for the greenback dipped against the euro and British pound, but held onto gains on the yen, after a less than stellar jobs report from payroll processor ADP.

ADP showed that the United States lost 23,000 private sector jobs in March after losing an upwardly revised 24,000 in February. Economists surveyed by Briefing.com expected jobs to grow by 40,000.

A negative jobs report tends to drive down the price of the dollar against major currencies, since lower employment reduces confidence in the strength of the U.S. economy and its relative safety as an investment.

What analysts are saying: "The ADP number was a bit of a disappointment," said Brian Dolan, chief currency strategist for Forex.com. "The dollar is taking it on the chin as a result."

Investors continued to flow into the British pound after the U.K. government on Tuesday reported better-than-expected economic growth in the fourth quarter.

Although the euro was up against the dollar, currency analysts for Sucden Financial said widening yield spreads on Greek and German bonds and rumors that France's credit ratings could be downgraded soon are stifling momentum against the dollar. Dolan agrees, but said the euro could sell off again at $1.37.

The yen saw increased buying as investors adjusted positions for the close of Japan's fiscal year on Wednesday.

"What typically happens is that Japanese companies sell foreign currency and buy back yen in the earnings repatriation process, which puts pressure on yen," said Dolan. "Once that ends, there's less yen buying."

Looking ahead: Traders will be keeping an eye on the government's monthly jobs report, due out Friday. Economists surveyed by Briefing.com expect March non-farm payrolls to have risen by 190,000.