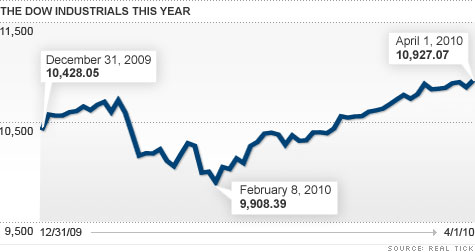 NEW YORK (CNNMoney.com) -- Stock investors return from a long weekend ready to embrace an encouraging piece of news: The economy added more jobs in March than in any month in the last three years.

With stock markets closed for Good Friday, the Monday after Easter is the first trading day for investors to react to the report.

"I think investors will see it as a sign that the economy continues to improve," said Karl Mills, president and CEO at Jurika Mills & Keifer.

Employers added 162,000 jobs in March after losing a revised 14,000 jobs in February, the Department of Labor said Friday. Economists had predicted a gain of 184,000 jobs, according to a consensus of economists surveyed by Briefing.com.

However, the report was not seen as disappointing, with economists noting that results were encouraging, even when stripping out temp jobs and the jobs created by the Census Bureau for its once-a-decade head count of the U.S. population.

"The number wasn't as strong as people had hoped," Mills said. "But it was still a positive and shows that the labor market is moving in the right direction."

The unemployment rate, generated by a separate survey, held steady at 9.7% as expected.

Mills said that one concerning factor to keep an eye on in the weeks ahead is the spike in treasury bond yields, amid worries about inflation and rising interest rates.

Bond markets were opened for a shortened-trading session Friday, with prices tumbling and the corresponding yields rising after the job market report. The benchmark 10-year note rose to 3.94%, the highest level in nearly 10 months.

The dumping of bonds in favor of stocks or other riskier investments indicates investors are feeling a bit more optimistic about the economy. But the ten-year note yield is tethered to lots of consumer loans, and a sustained period of higher rates would raise borrowing costs for mortgages and other kinds of debt.

Stocks stalling at recent highs: While the reaction on a sentiment level is bound to be positive, the report may not give much of a boost to stock markets after the recent rally. The Dow, Nasdaq and S&P 500 have all risen in six of the last seven weeks and are now standing at or just below their highest levels in 18 months.

"I think we have another quarter or two in front of us that could be strong," said Fred Dickson, chief market strategist at D.A. Davidson & Co. "But because we've gone so far, so fast, it wouldn't be surprising to see a pullback of 4% or 5% sometime in the next month or two."

iPad: Apple (AAPL, Fortune 500)'s new iPad debuted Saturday and the sales results will be scrutinized Monday, both in terms of what it means for the company and for other computer, e-reader and smartphone makers.

Early reviews have been varied, with critics praising the resolution, screen quality and lightness of the tablet computer or bemoaning the lack of features normally found on a laptop.

Apple stock has rallied in anticipation of the debut but could take a hit next week if investors take a "sell the news" approach. Apple shares have gained 12% so far this year and 109% in the last 12 months, closing at an all-time high of $235.97 Thursday.

Monday: The Pending Home Sales index for February is expected to have fallen 1%, according to a consensus of economists surveyed by Briefing.com. Sales fell 7.6% in the previous month.

The Institute for Supply Management's services sector index, due after the start of trading, is expected to have risen to 53.6 in March from 50.0 in February.

Tuesday: The minutes from the last Federal Reserve policy-setting meeting are due for release in the afternoon.

Wednesday: February consumer credit is expected to have risen $1.6 billion after rising $5 billion in the previous month. The report from the Federal Reserve is due out in the morning.

The weekly oil inventories report from the government is due in the morning.

Thursday: The weekly jobless claims report from the Department of Labor is due in the morning.

March sales from the nation's retailers are due throughout the morning. Last month, sales jumped a bigger-than-expected 4%, rising for the sixth month in a row. Investors will be looking to see if consumers can continue the trend for another month.

Friday: Wholesale inventories are expected to have risen 0.3% in February after falling 0.1% in the previous month. The Commerce Department report is due in the morning.