NEW YORK (CNNMoney.com) -- Stocks tumbled Wednesday following a report that consumer borrowing fell and General Motors said it lost billions of dollars during the second half of 2009. 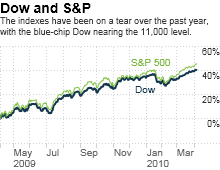 The blue-chip Dow has bumped against the important mark lately. On Monday, the index rose to within 11 points of 11,000. The Dow last closed above that level on Sept. 26, 2008.

Trading on Wall Street was muted Tuesday, but the Nasdaq and S&P 500 edged higher to finish at 1-1/2 year highs.

"With such a strong runup, you're going to hit resistance eventually," said Alan Lancz, president at Alan B. Lancz & Associates. "The market needs a catalyst to get investors to buy at these levels."

Companies: Shortly after the start of trade, General Motors posted a $4.3 billion loss for the July-December period of 2009, during which the company emerged from bankruptcy protection.

In its annual report released Wednesday, Goldman Sachs (GS, Fortune 500) defended employee bonuses and its multi-billion dollar relationship with AIG (AIG, Fortune 500) while downplaying its short-selling in the mortgage market.

The market is in a "wait-and-see" pattern, Lancz said, as investors look ahead to next week and the quarterly corporate results season.

Earnings reports have been generally upbeat recently, and the trend is still upward, but Lancz said he worries about upcoming quarters.

"Later in 2010, year-over-year comparisons will be difficult," Lancz explained. "We'll also have the headwinds of increased interest rates, and higher commodities costs. I think that's going to slow further progress."

Economy: With one hour left in the session, the Federal Reserve reported consumer credit fell at an annual rate of 5.6% in February to $2.448 trillion, after increasing for the first time in a year during the previous month.

That was much worse than expected, as analysts expected a drop of only $0.7 billion. The Dow fell more than 122 points immediately following the report's release then pared losses ahead of the market's close.

"That is definitely disappointing, as it shows a lack of confidence in buying," Lancz said. "Investors are going to be jumpy on any kind of negative data."

Lingering concerns about the debt woes brewing in Europe also weighed on stocks, Lancz said. Greece denied reports Tuesday that it was uncomfortable with accepting assistance from the International Monetary Fund.

The Financial Crisis Inquiry Commission began a three-day hearing, focusing on the causes behind the mortgage meltdown. Former Fed Chief Alan Greenspan testified at Wednesday's hearing, saying that while steps can be taken to limit the impact of another shock, regulators can't fully prevent another crisis from happening.

"Overall, depending on what you look at, there's good news and bad news," Hinnenkamp said. "But if you look at corporate balance sheets, companies are sitting on a lot of cash as they wait for recovery. That bodes well for down the road."

Beyond corporate earnings and the unemployment rate, investors are also looking at the impact of winding down federal purchase programs, Hinnenkamp said. Last week, the Federal Reserve stopped buying securities backed by pools of mortgages.

Other markets: U.S. Treasurys rose, with the yield on the benchmark 10-year note falling to 3.63%. Bond prices and yields move in opposite directions.

Earlier this week, the yield topped 4% for the first time in 18 months amid optimism about the economic recovery. Wednesday's auction of 10-year notes was part of an $82 billion offering this week of U.S. debt.

The dollar managed gains against the euro and British pound, but it slipped against the yen.

Consumer behavior shows recession is over