Retire to Mexico -- the price is right 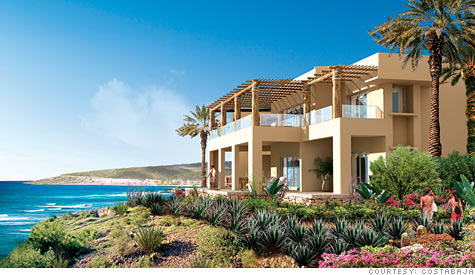 Resort Costa Baja has seen a recent resurgance in interest from homebuyers. See photos of more south of the border deals. By Les Christie, staff writerApril 28, 2010: 10:48 AM ET

NEW YORK (CNNMoney.com) -- The years-long trend of Americans buying homes and expatriating to Mexico has collapsed, done in by a trifecta of the recession, swine flu and an epic crime wave.

Sales volume plunged nearly 70% last year for Coldwell Banker, according Phillip Hendrix, director of the firm's Mexican operations. And at Costa Baja, a residential resort development a few miles north of La Paz, sales have slowed by about 40% in the past 12 months.

"Sales are off like crazy. The recession is really hurting and the headlines have been driving people away. The narco-wars especially have bit into the housing market in Mexico," said Tom Kelly, a follower of Mexican real estate trends and author of Cashing In on a Second Home in Mexico.

But that's good news for Americans who have always dreamed of retiring to Mexico but could never afford it: The bust has made homebuying a bargain. Prices can be less than half of what an equivalent home would run in the U.S.

Although the crime wave is confined to a fairly limited area, the perception of it has hurt markets all over the nation, said Alejandro Yberri, CEO of Costa Baja.

Information on prices of homes being sold to expatriate Americans is sketchy, but Kelly estimates overall declines of between 20% and 30% since the peak. In the high-crime communities close to the U.S. border, the drop has been even steeper, perhaps 40% or more.

Still, that means deals for adventurous souls -- even in safe traditionally expatriate neighborhoods.

Lovers of Mexico, like Bruce Greenberg, a marketing consultant for Mexican real estate, rue that the entire country has been colored by the border wars. "Walk around Cabo or La Paz," he said. "Owners and tourists are unaffected. Even in the borders cities, it's a turf war, rarely affecting Americans."

Indeed, neighborhoods in southern Baja cities, even late at night, seem perfectly secure. On the waterfront of downtown La Paz recently, there were families out pushing strollers, lovers cuddling on benches and children eating ice cream at 11 p.m. No one seemed at all nervous.

The housing markets down south may be starting to revive a little after being on life support the past couple of years. Outside San Jose del Cabo, a couple hours south of La Paz, lot sales in the huge Puerto Los Cabos development have increased this year after being very slow in 2008 and 2009, according to its marketing director Alex Cuttler.

Up and down the coastal resort communities of southern Baja the landscape teems with sale signs, mostly in English.

That all changes up north, where crime has raged more fiercely and the border patrol has stepped up security, making traveling between the U.S. and Mexico more difficult. That means northern Mexican resorts, such as Rosarito, Rocky Point and San Felipe have suffered the most in this real estate downturn, according to Hendrix.

The homes here are less than an hour's drive from Southern California and Arizona, so many Americans would buy them as weekend and vacation retreats.

But with border guards on high alert and the crackdown on smuggling and illegal immigration, getting back into the United States can tack on an extra two or three hours at the border crossing. And that surely discourages some homebuyers even though a three bedroom, ocean-front condo can sell for less than $300,000 there, a fraction of its price back home.

All the problems have slowed sales in northern Mexico a lot. A recent Los Angeles Times story about the Baja bust made the sea-side corridor between Tijuana and Ensenada sound like a ghost town.

Perversely, that story juiced buyer interest, according to Kelly.

"Realtors were deluged with inquiries," he said. "People were thinking that the bottom was reached."

How foreclosure impacts your credit score