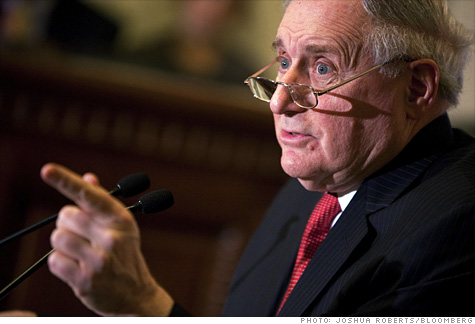 (Fortune) -- At Tuesday's epic Goldman Sachs hearing, Senator Carl Levin of Michigan led a public grilling of Wall Street not seen by a government panel since the Depression-investigating Pecora Commission. Fortune wanted to know what Levin thought of the answers he got from executives, including CEO Lloyd Blankfein, whether Goldman can save its reputation, and what his committee has learned from its hearings on the financial crisis.

It was surprising how much the Goldman Sachs (GS, Fortune 500) executives talked. How did you get them to reveal what they did?

By confronting them with their own documents. A lot of time and work goes into getting huge amounts, literally millions, of documents ... I think when people are confronted by their own documents by someone who's really studied those documents; it's easier to force them to respond.

They obviously were trying to delay and evade answering. We had a willingness to take them on and not let them talk forever, telling them, "Hey we'll stay here all night if we have to, but we're going to get the information we want."

And when they did answer?

When they did answer, some people have asked me, "Were they telling you the truth?" The answer is yeah, and that's what's even more troubling than the evasions -- they are defending what most people would say are indefensible actions. They shouldn't be betting against what they're selling at the same time they're telling you: "Here, these are our securities, our names are on the prospectus."

I think people think that someone selling something believes their product needs to succeed in some general way; that they want it to succeed. But [Goldman Sachs] are betting against [their product] and basically say they are going to profit from its failure. At that point, in most people's minds, clearly in mine, there's a conflict of interest. You're betting against a product that you're holding out to the public, by fair assumption, as a good product.

They were trying to turn this into, "We can't guarantee that people are making money," but that's not the point. The point is that at the same time you're holding this thing out as something that presumably you'd like to see provide something good for your customer, you're betting against it and making a heck of a lot of money by its failure. And you're not disclosing that.

To add insult to injury, in those emails that call it "junk" that they're selling, "crap," and I won't get into the "shitty" word but anyway, that adds insult to injury. When you're putting together a product, hold that out and then are betting against that same product, I think it's a conflict and at minimum you have to tell people, not some boilerplate that you might be on the other side, but in clear language that you're betting against [the security].

Regulators have taken a lot of blame for the crisis but doesn't part of this come from the laws -- or lack of laws -- surrounding these activities? Goldman seemed to testify that its actions were unseemly but not illegal.

The reaction of one guy when I asked about his reaction to his emails was, "That shouldn't have been in an email." There are two different worlds here. My reaction was, "You shouldn't believe that, you shouldn't feel that."

I could have understood the reaction [by Goldman] that they should not be selling stuff that they're betting against and think is junk, but they don't say that because they don't believe it. They think they can do anything they want, that it's a dog-eat-dog market and all these sophisticated buyers know that.

I disagree. The sophisticated buyers see an AAA rating on something: they're not then going to go into the 500 mortgages referred to in a synthetic CDO. There's no way they can. They're not the underwriter, they haven't put it together.

Of course with Abacus, when you have the fact that [John Paulson], who was betting against it, helped put the referenced mortgages together, that's just a second insult.

It's not just Wall Street, it's upstream: We spent a long time getting into the Washington Mutual issue as an example of lenders putting together shoddy mortgages, securitizing them and getting them off their books. These are mortgages, which never should've been issued where the regulator failed to enforce the laws in this case.

The regulators pointed out things in emails and visits to the bank ... but they never enforced it. There's a failure to stop the abuses. Then you have credit rating agencies susceptible to pressure, acknowledge it in emails, and are involved in an inherent conflict of interest. They're being pressured to put higher ratings on financial documents by the people who will benefit from those ratings and they're being paid by those people. You have the problem of the person who pays the fiddler calling the tune.

Then you get down to Wall Street with their vacuuming up these securities and getting the risk off their books without disclosing it. It's not limited to Wall Street's unbridled greed, it comes all the way from upstream.

Goldman executives talked about client trust and how important that is to their business. After what took place, how do you think that trust can be retained?

But I pointed out point blank to Blankfein: "Your motto is that you need the trust of your clients, that your client comes first." Well that's not true. That is simply not true.

When they say they are just market makers? Well that's not true either. Market makers presumably have a buyer and seller and try to bring them together. In this case they're their own client. They're getting rid of the risk in their own inventory. In the Hudson [CDO]? They put together stuff from their own inventory and shifted the risk to the buyer of the security. And then they have their insurance policy, the CDS.

If they think that's ok, they don't have my trust. If they acknowledge, "We're going to take steps to change that, we're going to just be market makers," fine. Clearly there's a role there. But not when they're their own client, when they are on the other side of the deal. That's not bringing buyers and sellers together and disclosing your interest. That's not making a market, that's manipulating a market.

Until we tighten the law and make it clear that that kind of conflict is unacceptable, I guess people who are buying -- not just from Goldman but anyone -- have got to say, "OK, you've underwritten this security, do you have an interest on the other side of this security?"

The buyer's going to have to ask questions that will unearth conflicts and then make their own judgment as to whether they want to buy something from an investment bank that is underwriting something they don't believe in. If they want to buy and they know that, well, OK. If a pension fund wants to do that, I won't stop them, But boy I think there won't be a whole lot of sales.

Do you think that the executive team, Blankfein specifically, is capable and interested in making those changes? Should he resign in favor of new management?

Well I don't want to get into the resignation issue because that's really up to the company, the board, the owners of the stock.

But I did not see any willingness to face up to that kind of an ethical conflict. I just didn't see any. That was really disappointing because when they weren't evading and they were responding, they didn't seem to see or understand the implications of what they were saying.

So I don't have a lot of confidence they would be able to come up with the kind of policy for their firm that would earn the trust I think they are going to need. But I wouldn't want to get involved in who should be there.

What has been the takeaway from the whole series of hearings on the crisis? Has the point been to educate or help make the case for financial reform?

I think this gives [financial reform] a powerful boost. A number of my colleagues have felt this information is very useful in terms of the debate. From millions of pages [of evidence], we finally selected about 2,500 pages for four hearings, with long opening statements [from the committee] laying it out. I hope it's been useful in terms of informing the debate and I think it has been in producing specifics, so we have examples of problems and not just arguing theory.

The Department of Justice just announced they were going to probe Goldman. Do you have any thoughts on that?

It's not really up to us to get into whether there should be criminal indictments or SEC actions. Our role is an oversight role and to help inform the legislative process, so I really do not get involved in the question of criminal actions.

There may or may not be a reference from us to the Justice Department or the SEC, but I don't know whether that's going to happen yet. It won't, until the dust settles a little and we can analyze the record and the transcripts and look for very specific questions that may or may not lead to a reference.

My own private Goldman testimony

What Goldman Sachs can learn from Wal-Mart

Goldman should overhaul its board