NEW YORK (CNNMoney.com) -- Stocks tumbled Tuesday on worries that the global recovery could suffer if Europe's efforts to contain Greece's debt problems don't succeed, and if China's efforts to slow its booming economy go too far.

Bond prices rallied, lowering the corresponding yields, as investors sought the comparative safety of government debt. The euro fell to a new yearly low versus the dollar, pummeling dollar-traded energy prices and stocks. 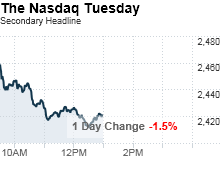 The Dow Jones industrial average (INDU) slumped 225 points, after having fallen as much as 282 points earlier. The decline, equivalent to 2%, was the average's biggest one-day point drop since February 4. The S&P 500 index (SPX) lost 29 points, or 2.4%. The Nasdaq composite (COMP) fell 74 points, or 3%.

"We're realizing that Greece's problems are not going to go away and that China has to slow growth down," said Drew Kanaly, CEO and chairman at Kanaly Trust. "These issues are giving us a view into our own future if we keep piling up debt."

He said that markets are worried about how the U.S. will balance growth with inflationary risks, and what the impact of the growing deficit will mean. The ongoing impact from the oil spill in the Gulf of Mexico on commodities was also a factor, he said.

The broad worries were reflected by the spike in the CBOE Volatility index (VIX), or the VIX, Wall-Street's so-called fear gauge. The VIX jumped 18%, briefly topping its highest point since Feb. 10 before pulling back a bit.

Early February was the bottom of the market's other notable selloff this year, when worries about China and Greece sent the S&P 500 down by about 9% in just over three weeks.

"I think a little volatility is back," said Dave Hinnenkamp, CEO of KDV Wealth Management. "We're getting triple-digit moves (on the Dow) like we haven't seen in a while. We've had some big moves but the market hasn't gone anywhere."

The market was also vulnerable after stocks slumped last week and the Dow broke its 8-week winning streak, its longest run in six years. In that time, the Dow gained over 15%.

Hinnenkamp said there's a battle going on between the improved earnings and everything else, including the euro zone debt issues, the oil spill and China's efforts to curb inflation without slowing growth.

European debt: Stocks rallied Monday after European leaders agreed to provide Greece with $146 billion in loans over three years -- with promises of the first payment due to arrive ahead of a key May 19 deadline, when the nation owes over $11 billion.

The Greek bailout package, funded jointly by the European Union and the International Monetary Fund, seemed to set a template for other bailouts, should they be needed. Greece is one of the so-called PIIGS -- five European nations with heavy debt loads that investors fear could destabilize the euro and slow global growth should they all default. Portugal, Italy, Ireland and Spain are the other four.

But relief about the plan turned to worries about its execution Tuesday on concerns that not all of the 15 other euro zone nations would be willing to get on board. Influential Germany said Monday it would commit to loaning $40 billion to Greece over the three years, but it's not yet clear whether the whole group will be willing to participate. In addition, such a substantial commitment could limit European leaders should other nations need a comparable bailout.

Europe gets a bad case of Greek flu

Asian markets fell, with Hong Kong's Hang Seng index down 0.2%. The Japanese Nikkei was closed for a national holiday.

In China, the Shanghai Composite lost 1.2% after the country said manufacturing grew at a slower-than-expected pace in April. Investors were also reacting to news over the weekend that China has boosted its bank reserves.

The dollar and commodities: The dollar rallied versus the euro and fell against the yen.

U.S. light crude oil for June delivery fell $3.45 to settle at $82.74 a barrel on the New York Mercantile Exchange.

Economy: Pending home sales rose 5.3% in March after climbing 8.3% in February. A consensus of economists surveyed by Briefing.com expected sales to increase 5%.

Factory orders were 1.3% higher in April after rising 1.3% in March, the Commerce Department said. Economists thought orders would fall 0.2%.

President Obama, speaking to the Business Council in Washington in the afternoon, said that after a tough two years, the "storm is receding"

Merck and Pfizer were two of only three Dow components to post gains Tuesday. The third was Wal-Mart Stores (WMT, Fortune 500).