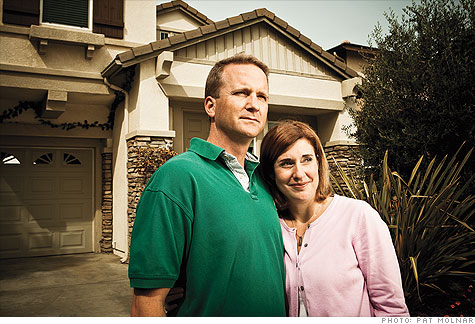 (Money Magazine) -- A transfer in 2005 landed Air Force major Richard Hallbeck, his wife, and two kids in Southern California smack in the middle of the real estate bubble. Home prices in the area had doubled in the past five years and were still climbing. So the Hallbecks swallowed hard and bought an $845,000 four-bedroom in a suburb of Long Beach.

The $3,800 monthly payment was high but affordable on two incomes. (Laurie, now 37, worked as a claims adjuster.) And they figured the market was so strong that when they had to move again, they'd at least break even. "Our house actually appraised over what we paid for it," Richard, 42, recalls wistfully.

Since then, area sale prices have fallen 26% -- when properties sell at all. Meanwhile, the recession cost Laurie her job, and the payment on the couple's adjustable-rate mortgage will jump $800 in July. Next year Richard will face mandatory retirement from the Air Force, and his pension will be a third of his current $117,000 income.

All that's got the Hallbecks anxious to move to a more affordable city -- like Dayton, where they used to live. But they're just as anxious about how much they could lose on the sale of their house.

A similar home down the street lists for $655,000, $21,000 less than the Hallbecks' outstanding mortgage. At that price, the couple would be out $231,000, including their down payment and closing costs. "The stress has really worn on us," Richard says.

Nationwide, about one in four home mortgages are now underwater, meaning borrowers owe more than their places are worth. No surprise, California and other bubbly states -- Nevada, Arizona, and Florida -- lead the nation.

While a bevy of new federal programs aim to help, underwater owners who want to move still face uncomfortable choices: Postpone the move and continue sinking money into a pit; sell for a loss, forfeiting the down payment and some savings to close the deal; desperately try to enter into a short sale; or simply walk away and face the consequences of foreclosure. If you (or your kids) are in this situation, here's how to think about the options.

Keep on keeping on

If you don't have to move and can afford the payments, it probably makes sense to soldier on and wait for housing prices to recover, says Denver financial planner Ross Schmidt. Moody's Economy.com projects that prices in 61% of metro areas will return to recent peak levels by 2015.

If you live in one of the harder-hit cities -- which may take 20 years to rebound -- and you're more than 25% underwater, your house won't be a financial asset anytime soon. But as long as you're happy to stay in it for many years, that may not matter.

In the meantime, you may be able to cut your loan balance -- and lower your payments -- through a new federal program that refinances existing loans into smaller FHA loans. To qualify, you must be current on payments -- but it's up to the lender to agree to it.

The Hallbecks might have been eligible for some of this aid, but Laurie is eager to move with the kids by this fall, rather than waiting until Richard retires -- which will be in the middle of the school year.

Beg the bank for a break

What if you need to get out of the house? The Hallbecks initially considered renting their place out. But they'd probably lose money, given the spread between their mortgage payment and rental prices. Becoming a landlord is a risk even in areas where you can cover carrying costs, as you're still on the hook in between tenants, says Maryland financial planner Timothy Maurer.

A cleaner option may be to ask your lender for a short sale, in which it would accept less than the loan amount. To convince the bank, homeowners must show they're at risk of default because they can't make payments or are so deep underwater that they're likely to bail. (With $155,000 in savings outside of retirement accounts, it's unlikely the Hallbecks will qualify.)

It can take months to arrange a short sale, if you're successful at all. So for best results, work with a "distressed-property specialist," a real estate agent who has experience negotiating with lenders. At realtor.com, select "SFR" under Find a Realtor to search for this type of specialist.

Also seek free advice from a certified mortgage consultant, whom you can find via makinghomeaffordable.gov, suggests Melinda Opperman, of Springboard Nonprofit Consumer Credit Management. Such an adviser can help you determine whether your loan type allows the bank to come after you for money later. He or she can also help ensure the loan is reported as "settled" to the credit bureaus. A mortgage listed as "settled for less than agreed" can damage your score the way a foreclosure would.

Speaking of foreclosure, University of Arizona law professor Brent White says walking away may make sense financially if you're more than 40% underwater and could rent a similar house for less than your mortgage bill. But doing so has consequences, not the least of which may be a guilty conscience. Foreclosure stays on your credit report seven years -- and can cut a 780 score an average of 150 points, per Fair Isaac. That can affect everything from your insurance premiums to your employment potential to your future ability to buy a house.

Eat the loss yourself

For the Hallbecks, the best -- and fastest -- option may be simply selling the house and paying any difference between the sale price and the mortgage out of pocket, says Maurer. That is a good, if not particularly palatable, choice for homeowners who have significant savings and aren't deeply underwater. Selling this way eliminates any credit risks.

Since Money first spoke to the Hallbecks, they have listed their home and attracted an offer of $655,000. That would've meant shelling out the $21,000 difference, plus some $40,000 in commissions and closing costs. So, the couple decided to hold out for more. "Hopefully," says Richard, "our expectations aren't too high."

Foreclosure is hitting well-off families, too