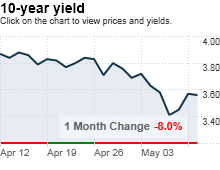 What's moving the market: Increased confidence in the market on Wednesday led investors away from the safety of government-backed bonds and into riskier assets like stocks.

A report from the euro zone showed that the region's economy grew 0.2% in the first quarter. Spain also announced Wednesday it would implement austerity measures to trim its budget deficit, a further signal that the euro zone is taking steps to strengthen its economy and address its debt issues.

These signs of improvement come after a European rescue package, valued at nearly $1 trillion, was introduced over the weekend in an attempt stabilize the euro and strengthen debt-ridden nations such as Greece.

While the market lost steam on Tuesday because investors became skeptical of how effective the aid package would be, some confidence returned on Wednesday.

"[Treasurys] are losing some of their safe-haven status as we see a bit of improved confidence since the wobbly start of the rescue package for Greece," said Kim Rupert, a fixed income analyst at Action Economics.

The weakness in the stock market even outweighed the Treasury Department's latest auction results on Wednesday, said Rupert.

The government's $24 billion offering of 10-year notes on Wednesday was met with solid demand, with investors submitting bids totaling $70.9 billion.

"It was pretty well subscribed and showed that there is still solid demand for the safety and liquidity of Treasurys," said Rupert.

On Thursday, the government is scheduled to hold a $16 billion auction of 30-year bonds.

Libor is a daily average of interest rates that 16 London banks charge each other to lend money, and is used as a benchmark to calculate adjustable-rate mortgages and other loans.

How long can the Fed play fireman?

Help Desk
Track testing tires to find the best
Find out how TireRack tests and reviews tires and why choosing the right ones for your car is so important. Play
Markets
Data as of 1:27am ET
Data as of 2:44pm ET
Sponsored by
Sections