4 ways to stop the oil spill 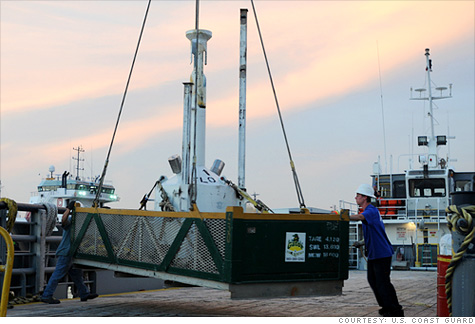 The top hat, one of the methods BP is using to stop the leak, was loaded on to a boat and then lowered to the ocean floor earlier this week. By Steve Hargreaves, Senior writerMay 14, 2010: 3:01 PM ET

NEW YORK (CNNMoney.com) -- As oil continues to gush into the Gulf of Mexico, BP and an assortment of other engineers are racing to stop the spill.

But stanching a flowing oil well 5,000 feet below the water's surface is no easy task. Imagine trying to put a cap on a fire hydrant flowing full blast, in the dark, under immense pressure, with near freezing temperatures.

When the well first exploded, it had three different leaks. But earlier this month, BP successfully plugged one of those leaks, however that didn't reduce the overall volume of oil spilling into the ocean.

Now BP (BP) has come up with four solutions it is trying simultaneously to stop the two leaks that remain.

Double pipe: On Thursday, BP announced its latest idea to stop the leak.

This plan calls for a new section of pipe, ringed with a gasket, to be inserted into one end of the leaking riser pipe. The riser pipe connects the well head to the drill rig.

One end of the riser pipe is still connected to the well head, which is also leaking oil. But the other end now lies about 450 feet away following the explosion and sinking of the drill rig last month, which claimed 11 lives.

If this second pipe can be inserted, the plan would be to connect it to ships at the surface, where the oil could be off loaded.

The top hat: This is plan B to stop the riser leak, in case the double pipe fails.

The top hat is a smaller version of the dome that BP tried to install earlier this week - a sort of upside down funnel designed to trap the oil and channel it to the surface, again to be offloaded onto ships.

The dome will be placed over oil that is leaking from the riser pipe.

The larger dome failed because ice-like crystals known as methane hydrates built up in the dome and plugged the outlet at the top that would have delivered the leaking oil to a tanker. Methane hydrates, potentially a vast energy source themselves, form when natural gas comes into contact with water at high pressure and low temperatures.

By using a smaller dome, BP hopes it can inject methanol into the container, which should act like an antifreeze and keep the outlet clear.

The top hat was placed on the sea floor Wednesday, and BP plans on moving it into place and connecting it to the surface over the weekend.

The junk shot: This idea has attracted lots of attention, not all of it good.

The plan is to use ground up rubber and plastic from old tires, golf balls and other items and inject it at high pressure down a three inch hose from the surface right into the blowout preventer. The blowout preventer is a 450 ton device that sits over the well head and is used to control pressure. This device should have closed when the well began to fail, but it only closed partially.

The hope is that the junk will get caught between the partially opened teeth of the blowout preventer and form a barrier. After that, cement can be injected into the well to seal it up.

Crazy as it sounds, it's an approach that's actually worked before, according to BP spokesman.

It was one if the tactics used by oil companies to shut off the wells in Kuwait after the first Gulf War, when the retreating Iraqi army blew up the control devices on top of the wells and set nearly half the country ablaze.

But others have criticized the company for proposing it, saying BP should have been more prepared for this type of thing and shouldn't be relying on such improvisational tactics.

BP is pressing ahead with the plan, which could begin as early as next week.

"Right now, BP is brainstorming and trying various things, but being very careful to not make things worse," said Langlinais.

The relief well: Ultimately, a second well drilled into the failed well is the surest way to stop the leak.

The second well would join the failed well at the very bottom, in rock some 13,000 feet below the ocean floor. This would lower the pressure on the failed well, enough to allow a concrete plug to be placed into it and permanently shut it down. The relief well could also be used for future oil and gas production.

BP began drilling the second well earlier this month, but it will take some three months to complete.

A BP spokesman said there are other temporary options available to try while the relief well is being drilled, if the first two don't work, but he won't elaborate on them.

But with three months to wait for a permanent plug, and some 200,000 gallons a day leaking into the gulf, everyone must be rooting for top hat and junk shot.

-- The CNN Wire contributed to this report