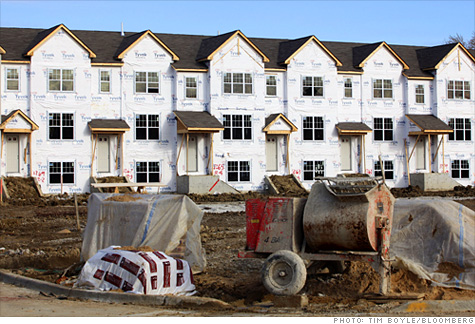 (Fortune) -- Americans purchased homes at a surprising clip in April, but don't let that fool you into thinking the housing market is back.

Although economists were expecting a month-over-month increase of 5.5%, the National Association of Realtors reported yesterday that sales of previously owned homes rose an unexpected 7.6%. That continued a yearlong rise in housing activity and marked the highest number of sales recorded since November of last year.

It also follows a drumbeat of similarly rosy economic news signaling the possibility that the United States may be on the economic mend. Government spending has helped spur factory production. A rising stock market and an improving job market have led to greater consumer optimism, which has stimulated spending. Further reports on housing and durable goods orders, due out later this week, will likely give consumers even more reason to feel confident that a recovery is at hand.

But prospective home buyers, particularly those tempted to think of real estate as an investment again, should tread with caution. One critical obstacle to a housing recovery remains intact: supply. Until the number of empty homes starts to shrink, prices could still fall further.

Moreover, notes Joseph Foudy, a professor of economics and management at NYU's Stern School of Business, we're coming off of an artificial bump from the first time home buyer credit, which expired last month. He predicts the second half of this year will see sluggish economic growth and that housing prices, at best, will be flat for the next few months, while commercial real estate "is likely to see significant declines."

Indeed, first-time buyers accounted for nearly half of the homes purchased in April. Buying has also been spurred by historically low mortgage rates, which have been kept modest by the Federal Reserve's recently expired $1.25 trillion mortgage-securities purchase program and by lenient lending standards at the Federal Housing Administration (FHA). In all, the US government, through Fannie Mae (FNM, Fortune 500), Freddie Mac (FRE, Fortune 500) and the FHA, underpins about 95% of the mortgage market. "This is a market purely on life support, sustained by the federal government," noted FHA's head, David Stevens, at the Mortgage Bankers Association conference yesterday. His agency is tightening lending -- which could take more buyers out of the market.

Optimists are pinning their hopes on a continuation of low mortgage rates. They note that rates could remain low because of concerns that debt problems in Europe portend a wider slowdown. Low rates help to reinforce demand. But even if these optimists are right, low rates only have so much of an effect. Despite the average 30-year rates now hovering around 4.8%, the Mortgage Bankers Association noted last week that the number of people seeking mortgage purchase applications had dropped more than 27%, reaching a level last seen in May 1997.

More importantly, what underpins those low rates also matters. Housing prices are unlikely to rise if unemployment does, or if incomes stay stagnant. And concerns in Europe could end up destabilizing housing prices further, which would dent consumer confidence -- not a good cycle to begin a recovery.

Also, an unintended consequence of the European debt crisis is that Libor, the benchmark borrowing rate that banks charge each other, has been on the rise, with Citigroup saying recently that it could end up a full percentage point higher within the next few months.

That would be bad news for the real estate market in a number of ways. Libor sets the rate for about $370 trillion in debt-related financing worldwide, including a host of consumer credit cards, home equity lines, student and small business loans, and adjustable-rate mortgages, as well as derivatives, such as credit swaps. A rise in Libor would mean higher rates on adjustable-rate mortgages. More importantly, it could raise the debt load of already-strapped consumers, reducing spending and further increasing mortgage delinquencies.

And delinquencies already account for more than 10% of all mortgages. These defaults aren't just on subprime ARMS anymore either, with prime fixed-rate loans now representing 37% of all delinquent loans. Moody's forecasts about 1.9 million homes will be taken from their owners this year, with a little over a million more going back to the banks in 2011. These can be added to the 6.3 million vacant homes currently sitting idle across America.

Many defaults have yet to be figured into the housing market because banks are sitting on them or they are being held back due to government programs like the federal Home Affordable Modification Program. LPS Applied Analytics has estimated that banks currently have about 1.1 million foreclosed homes in their inventory and that another 4.8 million mortgages are likely to end in foreclosure. At some point these homes will go on the market, further depressing prices.

But they won't be alone. Regular sellers have been coming out of the woodwork. NAR reported that the number of previously-owned homes placed on the market has risen quickly (reaching more than 4 million now) and that this inventory continues to far outpace the number whittled away through sales. The additional inventory is not a "healthy" development, said their chief economist, Lawrence Yun.

And it's just going to get worse. As analysts at Zillow noted last week, U.S. homeowners are so confident in the value of their homes that many of them plan to put up for-sale signs in their front yards. Zillow said that 7% of homeowners they polled were "very likely" to try to sell their homes in the next twelve months if the housing market seemed to be improving.

If 7% of all homeowners hit the market, that would equal about 5.3 million homes, more than the number of existing homes that sold all of last year. That's a lot of housing. Buyer beware.