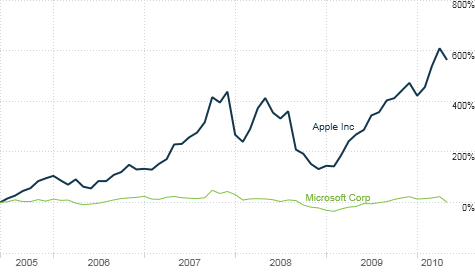 On Wednesday, Apple's market capitalization edged past its longtime rival's as investors made official what consumers have long suggested: Microsoft is no longer the industry's alpha dog.

Just last month, Microsoft's market cap exceeded Apple's by about $25 billion, but now Apple is in the lead by nearly $3 billion.

Microsoft's consumer products business is struggling to compete as Apple's hot new items like iPad and iPhone capture the attention of customers.

Shares of Microsoft have dipped more than 15% in the past couple weeks, while Apple's stock is down just over 6%, despite recent market volatility.

"Apple is showing high growth, with the launch of its iPad and its new iPhone coming out, and while Windows is a great competitor versus the Mac, Microsoft just hasn't come up with new areas of growth."

Microsoft's reputation as a market leader took another hit Tuesday when the company announced that it plans to shake up its management structure.

Amid the shuffle, Robbie Bach, who was in charge of years-long effort to turn Microsoft into more of a threat to Apple by heading the entertainment and devices group and overseeing innovative consumer products like Xbox and Zune, will retire from Microsoft in the fall.

"This just means those efforts didn't work out," said Roger Kay, president of analyst firm Endpoint Technologies. "It's sort of like Japanese samurai ethic, which says you need to fall on your sword to maintain your honor."

Toe the line or keep up with the Joneses?

Part of Microsoft's problem is that, instead of finding its own audience, it has fallen into a game of catch-up and is focusing too much energy on finding products to directly rival Apple's, said Kay.

"I don't know if they have to compete," he said. "What seems to be working for Microsoft is its serious applications for businesses, education institutions and other enterprises, and if they stay focused on their commercial business that gives them a lot."

While Microsoft's first quarter earnings were boosted by the success of its new operating system, Windows 7, Apple's record profit and revenue in the first quarter was driven by iPhone sales.

And many of Microsoft's efforts to branch out have been met with little success. For example, the company's Zune music player, meant to rival the iPod, has failed to create the same buzz as Apple's device, with sales dropping significantly in 2009.

Microsoft even looked into creating a tablet computer that would have competed directly with the iPad, which Apple introduced at the beginning of April, selling more than 1 million in the first 28 days of release. But Microsoft CEO Steve Ballmer ended up pulling the plug on the project before the tablet ever made it to market.

"Zune hasn't gone anywhere, their tablet is dead, their phones are having trouble establishing a market position -- but consumers still use Office and Windows," said Kay.

Other experts say that Microsoft shouldn't stop at its core business, and that it simply needs to innovate more -- and faster -- in order to stay competitive.

"They have to continue to try to find other businesses, otherwise growth is always going to be bound by the PC market," said Rosoff.

Until Microsoft develops a clear direction and finds new ways to innovate, Apple will continue to push ahead, he said.

"Wall Street believes in Apple because Apple continues to put out new products that capture the imaginations of the press and tech pundits," said Rosoff. "Microsoft just hasn't been able to come up with a new multi billion dollar business like Apple."