Dollar mixed ahead of holiday

NEW YORK (CNNMoney.com) -- The dollar was mixed against other currencies in thin and volatile trade Friday ahead of the U.S. holiday weekend.

Foreign exchange rates bounced along either side of breakeven in morning trade. Friday marked the last day of trading for the month of May, with Monday being the Memorial Day holiday in the United States. 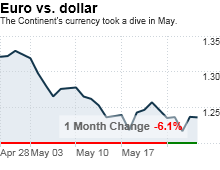 What analysts are saying: Europe was the big story in May, with its currency plunging 6% on concerns that a debt crisis would sweep through the Continent.

The euro has been stuck in its downward spiral for several weeks, even after the European Union met May 9 to approve a $1 trillion rescue package. That and other government moves have failed to put a floor under the currency.

In an effort to contain their debt problems, weaker members of the EU - including Greece, Portugal and Spain - announced major budget cuts. Deadly street riots broke out in Greece, and investors worried that the austerity measures will hamper any fragile recovery in Europe.

After foreclosure: How long until you can buy again?

Help Desk
Track testing tires to find the best
Find out how TireRack tests and reviews tires and why choosing the right ones for your car is so important. Play
Markets
Data as of 8:27am ET
Data as of 2:44pm ET
Sponsored by
Sections