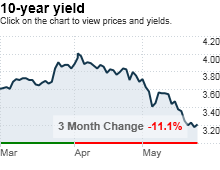 What's moving the market: Bonds were lifted as stocks tumbled, ending the Dow's worst May in 70 years.

Markets were already down in earlier trading, but they came under further pressure as worries about the euro zone debt crisis resurfaced following news that Spain's debt had been downgraded.

Treasurys are viewed as low-risk investments since they are backed by the U.S. government and are particularly attractive during times of economic uncertainty.

The Commerce Department reported Friday that personal income rose 0.4% in April, in line with estimates after gaining the same amount in the previous month. But personal spending, which was expected to rise 0.3%, was flat in April after posting a gain of 0.6% in March.

The University of Michigan's consumer sentiment index rose to 73.6 from 73.3 in the previous month, beating economists' forecast of an increase to 73.2.

Investors were also playing it safe before the bond market's early close on Friday and ahead of a long holiday weekend as concerns about European debt persist, said Kevin Giddis, managing director of fixed-income at Morgan Keegan.

How the European crisis affects your portfolio

Help Desk
Track testing tires to find the best
Find out how TireRack tests and reviews tires and why choosing the right ones for your car is so important. Play
Markets
Data as of 8:05am ET
Data as of 2:44pm ET
Sponsored by
Sponsors
Sections