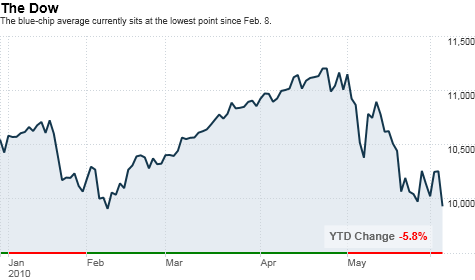 NEW YORK (CNNMoney.com) -- Worries about the global economy have pushed the Dow Jones industrial average to a nearly four-month low -- and there's little in the week ahead to stop it from creeping even lower.

Only a handful of economic reports are due early in the week, with the bulk of the news coming Thursday and Friday. On those two days, expect reports on jobs, the trade gap, consumer confidence and retail sales. Federal Reserve Chairman Ben Bernanke also speaks several times during the week, including testifying in Washington at a hearing on the economy.

A weaker-than-expected U.S. jobs report and renewed concerns about the European debt crisis pummeled stocks Friday, at the end of another down week on Wall Street. The euro fell to a four-year low and investors piled into bonds, looking for safety.

Investors seemed to be especially shaken by news that Hungary's debt problems are bad enough that it is at risk for default. For months investors have heard about problems with the PIIGS -- Portugal, Ireland, Italy, Greece and Spain. But Hungary adds to the argument that the problems are broader.

"It underscores a deeper worry about Europe and how it might impact the United States," said Bruce McCain, chief investment strategist at Key Private Bank.

"We're facing the prospect that growth there is slow and slowing as they attempt to deal with sovereign debt and we don't know how much that will impact our economy," he said.

This ongoing factor, combined with the weak labor market, has caused investors to rethink the U.S. economic outlook.

History shows that falling more than 15% from the highs generally brings on a bear market -- losses of more than 20%. But analysts are mixed as to whether the current correction is likely to accelerate into bear territory.

"I'd like to believe that we're not going to be down more than 20% from that April high, but that assumes that we skate over the consensus for a double-dip recession that the rest of the world seems to have," said Phil Orlando, chief equity market strategist at Federated Investors

Monday: The April consumer credit report is due in the afternoon, but it is not typically a market mover.

In the afternoon, Steve Jobs will deliver the keynote address at Apple's World Wide Developers Conference in San Francisco.

In the evening, Fed chairman Ben Bernanke will answer questions about the economy at an event in Washington, D.C.

Tuesday: Federal Reserve Board Governor Elizabeth A. Duke speaks at a conference in Florida about the aftermath of the financial crisis.

Wednesday: The government's April wholesale inventories and weekly crude oil inventories reports are due in the morning. The Fed's "beige book" reading on the nation's 12 economic districts is due in the afternoon.

Bernanke testifies at the House Committee on the budget regarding economic and financial conditions.

He also speaks in Richmond, Va., at a forum on the labor market.

Members of the House of Representatives and the Senate hold the first meeting on reconciling the Wall Street reform bill.

Thursday: The weekly jobless claims report from the Department of Labor is due in the morning. Roughly 450,000 Americans are expected to have filed new claims for unemployment last week versus 453,000 in the previous week, according to a consensus of economists surveyed by Briefing.com.

Continuing claims - a measure of Americans who have been receiving benefits for a week or more - is expected to have fallen to 4,600,000 from 4,666,000 in the previous week.

The April trade balance is due to be released by the government in the morning. The gap is expected to have widened to $41.2 billion from $40.4 billion in March.

The University of Michigan's consumer sentiment index is expected to have risen to 74.8 in June from 73.6 in late May. The report is due after the start of trading.

The April reading on business inventories, also from the government, is due out after the start of trading. Inventories likely rose 0.5% after rising 0.4% last month.

Stocks: $2.9 trillion on the sidelines

How to make better investment choices