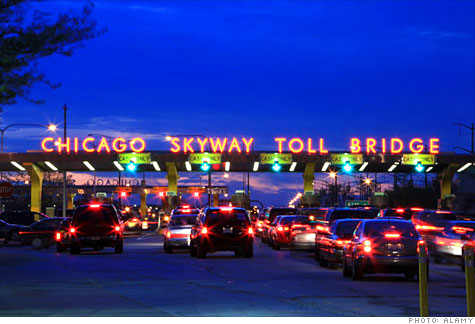 FORTUNE -- Every few years, market chatter about a coming wave of privatizations swells into a sea of noise and anticipation. Inevitably, the wave crashes, and private investors are usually foiled in their attempts to buy bridges and roads from states and municipalities. The details may change, but the basic theme stays the same: politicians realize that selling a toll road to Blackstone (BX) is no way to get re-elected.

Now private buyers are in talks for public assets yet again. But this time, there's reason to believe that more deals could transpire. Here are three reasons why the push to privatize assets from local governments could pan out.

1. Government hasn't been this broke in decades

Fortune recently profiled three cities are on the verge of bankruptcy, but they're only the worst of a very bad lot. States including New York, New Jersey, and California all face massive budget deficits at a time when tax receipts are down and demand for social services is growing.

"The political will to privatize assets hasn't been there in the past, but now local governments are realizing just what kind of bad shape they're in financially," says James Tanenbaum, chair of the global capital markets practice at law firm Morrison Foerster. "They are inclined to look at what can be privatized for cash, and that means opportunities for investors. But privatizing is something that municipalities and countries can only do once, so they're going to be very careful."

Public works projects are also starved for cash. The American Society of Civil Engineers says it will take more than $2 trillion over the next five years just to upkeep the nation's existing ailing infrastructure. Private investment could be an attractive alternative to the bond market, which is becoming more expensive for borrowers as municipal credit quality erodes.

Potential investors are well aware that politics could derail a deal, a lesson they re-learned just a few years ago when the proposed lease of the Pennsylvania Turnpike to a group led by Citi (C, Fortune 500) Infrastructure Investors fell apart. The deal failed for many reasons, including political concerns that private owners would have to jack up tolls to recoup operating expenses and make a decent return.

Fund managers are trying to build goodwill for their deals by including performance metrics, and union friendly language into contracts. They're also willing to place restrictions things like toll rate hikes.

"We're creating public-private partnerships, with a heavy emphasis on the last P," says Robert Dove, co-head of Carlyle's $1.15 billion infrastructure fund. "In the past people have just expected to write a check and then have the government hand over the keys, and that caused consternation. Our approach ensures that public interests and investor interests are aligned."

Carlyle closed deal at end of last year to take over Connecticut's 23 service plazas, which were rundown and needed investment that the government couldn't afford. In this case, Carlyle will invest $180 million in capital and share revenue and profits with the state.

3. Targets are less controversial -- for now

No amount of labor friendly language or revenue sharing is likely to keep voters from getting up in arms over the privatization of an iconic asset. (Imagine the uproar if New York City proposed a sale of the Brooklyn Bridge to a consortium of buyers that included a Wall Street bank, a private equity firm, and a sovereign wealth fund.) So this time around investors are looking at less emotionally charged targets. For example, fund advisors and M&A lawyers note that parking is the "flavor of the month," since politicians can usually sell of lots, garages, and street parking without incurring a lot of flack.

But investors won't be happy to invest in roadside rest stations and metered spots forever. They hope that more benign deals will prove that privatization doesn't have to end in disaster, paving the way for investments in things like bridges and tunnels. Public assets provide sort of steady, predictable cash flows and returns that please big limited partners, like pension funds and endowments.

"We're hopefully seeing an evolution in the model for investment in infrastructure," says Chris Ruffa, managing director and head of infrastructure project finance at BNP Paribas. "There will be a tipping point when private sector participation is no longer an option, but a necessity, and ultimately a preference in delivering infrastructure."

It seems hard to believe that this could happen in the US, but there is global precedent. Margaret Thatcher went so far as to break the unions in the UK to make way for privatization; and investors and pension funds in Europe and Canada already have large allocations to infrastructure.

Keep in mind that airports and parking lots wouldn't be the first public services to be privately run in this country. Utilities, among the most essential public services of them all, are these days mostly owned by private companies. That wasn't always the case, but now the corporations in charge turn a profit and regularly increase rates with nary a peep from the public.

Given the state of local budgets, the decay of our infrastructure, and the determination of investors to access stable, cash generating assets, this privatization wave could finally one that turns into a sea change.

The best private equity deal to ever fall apart