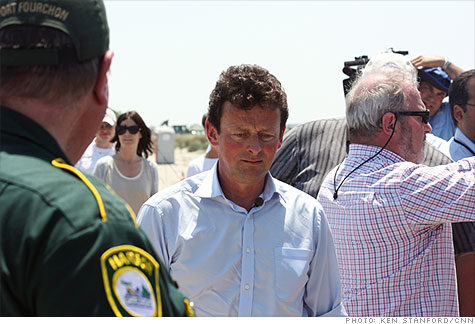 BP will certainly pay a lot of money to right things in the Gulf of Mexico, and some think it may even go bankrupt in the process. But what are the chances we'll see CEO Tony Hayward in handcuffs?

Not good, say most experts.

"I don't know how they'd get the CEO," said Lawrence Goldman, a former president of the National Association of Criminal Defense Lawyers. "My guess is that [the judgment call that led to the disaster] was a decision he did not have direct knowledge of."

But Goldman is among those legal experts that think its quite likely some mid-level employees at BP will go to jail.

"When things go bad, we are a vindictive, tribal society," he said. "My fear is that some poor schnook that did what he thought was right will end up being the scapegoat."

The BP officials in charge of the drilling process aboard the Deepwater Horizon rig when it exploded, Robert Kaluza and Donald Vidrine, could be among the mid-level employees where blame is placed.

Reports from congressional committees and in the press have indicated BP (BP) chose cheaper, riskier drilling tactics in the lead-up to the disaster.

Now, whether those decisions rise to the level of criminal negligence -- one of the thresholds for getting a criminal conviction -- remains to be seen.

During a recent Coast Guard hearing, Kaluza refused to testify, pleading the fifth, and Vidrine called in sick.

"Pleading the fifth is not a confession," said Tamar Frankel, a law professor at Boston University specializing in corporate and financial law. "But it puts in some type of question mark."

A spokesman for BP said the company does not comment on ongoing legal matters.

Frankel explained that establishing criminal negligence would require the government to show intent - and it seems pretty clear that no one intended the well to blow up.

But the company or individual employees could be found to be grossly negligent, she said, if they acted outside what others in the industry were doing and consider safe.

The answer to that is also far certain. During congressional testimony last month, the CEO from the company that owned the drilling rig, Transocean, said that some of the procedures in question BP had performed were not out of the ordinary.

Another angle the government may be exploring is whether BP lied or misled regulators in their plans for the oil well, said John Hueston, a partner at the law firm Irell and Manella and one of the government's prosecutors during the Enron case.

If regulators singed off on everything BP was doing, then the company may be off the hook in that department, said Hueston.

But if BP withheld some information about the well or altered some information so they would receive permission from the Minerals Management Service to drill the well using the faster techniques, then BP employees could go to jail.

Each instance of falsifying documents would carry a sentence of up to five years, said Hueston. "If there were multiple false statements, a person could be looking at decades."

Hueston doubts the falsifying would extend all the way to the top, so it would likely be a mid-level employee that took the fall.

Unless, of course, BP was found to have fostered a culture of putting profits over safety - a charge sometimes leveled against the company in the wake of the 2006 Alaska pipeline spill and the deadly 2005 Texas refinery explosion, and one BP always denies.

A third route the government will undoubtedly pursue will be violations of environmental law.

It's illegal to release oil into the water, whether on purpose or by accident. Same is true for killing certain bird species. These are the criminal violations Exxon ultimately pleaded to after the Valdez spill.

The maximum penalty for violating the Clean Water Act is three years in jail for each count, said Scott West, a former top regional field investigator for the Environmental Protection Agency who handled the government case against BP for the 2006 Alaska pipeline spill.

While West thinks there's a 50-50 chance someone will go to jail for environmental violations, he said it won't likely be Hayward.