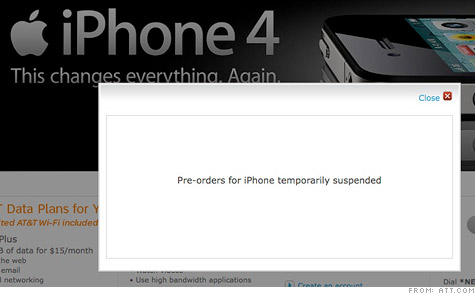 NEW YORK (CNNMoney.com) -- AT&T's epic iPhone 4 pre-order snafu on Tuesday was the latest in a long line of headaches the carrier has caused Apple. But even with concerns that AT&T accidentally revealed some subscribers' account information to other customers during Tuesday's fiasco, it's unlikely that Apple will suffer much fallout from its latest carrier crisis.

Apple's (AAPL, Fortune 500) public comments about AT&T (T, Fortune 500) have largely been positive, often focusing on the substantial monetary investment that AT&T has put into improving its network. But behind the scenes, experts believe Apple is irate.

"It's a hard position for Steve Jobs to be in because AT&T and Apple remain partners, so he can't be too outspoken in the press," said Carolina Milanesi, research director at Gartner. "But AT&T has limited the iPhone experience."

Many mobile analysts believe that a Verizon iPhone is coming soon, perhaps as early as this fall. Meanwhile, Steve Jobs & Co., who have built their company's reputation on devices with an unparalelled user experience, have to continue their fractured relationship with AT&T -- which has made iPhone customers' experience less than stellar.

"The frustration that consumers and our clients have towards AT&T is incredible, and this is just another thing to add to the list," Milanesi said. "Apple must be getting to the point where it is thinking, 'Enough is enough.'"

Apple's chic new smart phone clearly has iPhone fans abuzz. Apple said it sold 600,000 iPhones on Tuesday, vastly outpacing its sales of earlier models. The deluge was 10 times as many orders as AT&T fielded this time last year for the iPhone 3GS, and the company shut down sales Wednesday because it's already run out of inventory. Pre-orders, which had initially been scheduled for June 24 delivery, are now only guaranteed to arrive by July 14.

Though all of that should be good news for Apple, it was far from sunshine and roses on Tuesday. AT&T couldn't handle the stampede of pre-orders, and online and over-the-phone ordering returned frustrating error messages and busy signals. Many early-bird customers who showed up at retail stores had their information taken down on paper, which AT&T entered into the system manually after the systems were back online.

To make matters worse, several customers complained that when they logged onto their AT&T accounts to check their eligibility for an iPhone upgrade, they found that they were logged into another user's account instead. A number of customers said they were able to view other subscribers' personal information on Tuesday.

AT&T is steadfastly refusing to comment on those allegations. And while Apple apologized Wednesday for the pre-order problems, no one at AT&T has uttered the words "we're sorry."

"I tried to order over the phone and waited on hold for five minutes to be told I had to do it online or in a store," she said. "I tried online for two hours and kept getting error messages. I finally went to the store, waited an hour, and the sales clerk filled out my order by hand because their computers were down."

Brainard noted that the AT&T sales clerk called her to confirm that he had entered in her information later in the day. She received no apology from the company; instead, she was e-mailed an automated notification from AT&T that told her to expect her iPhone up to four days late.

This is far from the first negative incident Apple and its customers have endured with the carrier. The network's spotty 3G service, particularly in New York and San Francisco, has become the butt of late-night jokes, been mocked in Verizon commercials and even inspired an ill-fated Facebook campaign to bring down the network, called "Operation Chokehold." The top reason consumers who are in the market for an iPhone decide to pass is AT&T's 3G network problems, according to a CFI Group study.

Customers' ire towards AT&T has been palpable. Twitter exploded with angry messages directed toward the wireless carrier, and Facebook comments on CNNMoney.com's story about the iPhone 4 pre-order fiasco were equally scathing about AT&T.

When Apple finally puts its phone on another carrier in the United States, experts say AT&T will be in for a shock: As many as 40% of AT&T's iPhone customers will leave for Verizon once the network gets the iPhone, analyst Drake Johnstone of Davenport & Co. forecasts.

Many pundits think that's why AT&T allowed users to upgrade early to the new iPhone. By locking customers into a fresh two-year contract, the company may be softening the blow of frustrated customers churning off its service.

But how much will Apple's reputation suffer from this latest screw-up?

"The answer is zero. Not a drop," said Tom Dougherty, CEO of strategic branding company Stealing Share. "Apple is the king of irrational brand exuberance, and it would have to do something really, really horrific to lose that luster with its customers. It is the most successful brand in the entire world."

AT&T has been annoying iPhone customers for nearly three years now -- if consumers were going to take their rage out on Apple, it would have already happened by now, Dougherty said. And Tuesday's botched event may have even helped Apple's image in the end.

"This is the best thing that could have happened to Apple," he said. "The more scarce something is, the more we want it. It felt like everyone in the entire world must have been upgrading to the iPhone Tuesday."