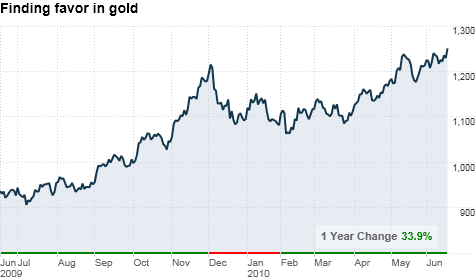 Foreign banks and investors alike have been flocking to the precious metal over the last year, sending it soaring to record highs. By Annalyn Censky, staff reporterJune 18, 2010: 8:36 AM ET

NEW YORK (CNNMoney.com) -- Foreign governments have been getting in on the recent gold rush, driven by continued fears about Europe's debt crisis and the pace of the global economic recovery.

Those concerns have been propelling the precious metal to record highs over the past 18 months. In fact, gold posted a new intra-day high Friday, when it reached $1,260.90 an ounce. A day earlier, it reached a fresh record high closing price of $1,248.70 an ounce.

Last year, foreign central banks were net buyers of gold for the first time since 1997. India, China and Russia have been the biggest buyers. And more recently, the Philippines and Kazakhstan jumped into the fray with big purchases of the precious metal during the first quarter, according to data released by the World Gold Council Thursday.

What's behind the buying binge?

Each country has its own unique reasons, but there are a few broad trends that unite them all, said Natalie Dempster, director of government affairs for the World Gold Council.

Like many individual investors, foreign governments prefer to spread their wealth around to decrease their risk.

The U.S. dollar is typically the main reserve asset because it's considered to be more stable than other holdings, while the euro comes in as the second most popular reserve currency. But gold is not far behind. The precious metal plays an important role as a hedge against inflation, which could devalue paper currencies.

Unlike paper currencies, gold has a tangible value and that value is not dependent on any one country's economic policies.

When the financial crisis drove down the dollar's value in 2009, and Europe's debt woes pushed the euro to fresh four-year lows earlier this month, investors and foreign central banks flocked to safe-haven assets like gold.

That's why it's no surprise that foreign central banks overall have turned from sellers into buyers of gold in the last year, he said.

Russia and Kazakhstan: As far as public records show, Russia appears to be the largest buyer of gold among central banks so far this year. In the first quarter of 2010, Russia's central bank increased its gold reserves by 26.6 metric tonnes, or about $1.2 billion at today's price, according to World Gold Council data. That's in addition to the 117.63 tonnes that Russia added in 2009.

Russia has been adding to its gold reserves steadily for more than three years, partly through buying its own domestic mine production. It considers gold both a symbol of prestige as well as a way to bolster the country's credit worthiness, Nichols said.

Kazakhstan, the third largest buyer so far in 2010, has a similar strategy, although at a much lesser level. The former Soviet-controlled country bought 3.1 tonnes, or $137 million, of the precious metal in the first quarter.

Philippines: After Russia, the Philippines falls a distant second as a buyer, after purchasing 9.6 tonnes, or about $424 million, of gold earlier this year.

The Philippines also buys its domestic production as a way of supporting local industry and as an inflation hedge, but its reserves usually fluctuate more than Russia's because the country often sells it at a later date on the open market.

India: While India has yet to publicly announce any major gold buys this year, the country bought a massive 200 tonnes, or what amounts to about $8.8 billion at current prices, from the International Monetary Fund in November.

The move, which multiplied India's reserves by 55%, was seen as a way for the country to diversify its reserves and reinforce the perception among Indian consumers that the metal is a reliable and safe asset, the World Gold Council said.

China: China is considered a stealth buyer of gold, said Boris Schlossberg, director of currency research at Global Forex Trading. As the world's largest producer of the metal, China often buys gold from its own mines and doesn't report those sales publicly. But in April 2009, China did admit to having added 454 tonnes, or a 76% increase, to its reserves since 2003.

Announcing an aggressive gold buying spree is not in China's best interest because, for one, it might push gold prices higher. Secondly, it could devalue the U.S. dollar, which would subsequently lessen the worth of the country's portfolio of U.S. government bonds, Schlossberg said.