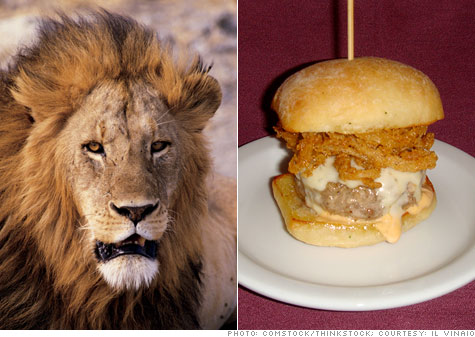 An African lion, and a burger from Il Vinaio restaurant made with lion meat. By Annalyn Censky, staff reporterJune 23, 2010: 5:19 PM ET

NEW YORK (CNNMoney.com) -- A small Arizona restaurant found itself at the center of a nationwide backlash that included a bomb threat after it announced plans to offer lion burgers this week as part of a World Cup promotion.

But following the supply chain back to the mom-and-pop butcher that processed the alleged lion meat turns up an even more bizarre tale.

That newsletter -- which was the sole publicity Selogie had planned -- exploded into a media blitz when one of the e-mail recipients turned out to be an animal activist.

She spread word to a local TV station, and the news has since circled the globe, even garnering a brief write-up in the online version of London's Daily Telegraph.

Lion burgers are an attention-grabbing idea, but it raises the question: How, exactly, does an Arizona restaurant manage to get its hands on African lion meat?

Welcome to the mysterious world of back-alley exotic meat purveyance.

Selogie said he bought the meat through a Phoenix distributor, Gourmet Imports-Wild Game -- a one-man operation owned by Rick Worrilow. Selogie says he did his research, and was told that the meat came from a free-range farm in Illinois that is regulated by the United States Department of Agriculture.

Meanwhile, Worrilow, who essentially serves as a middleman between farms, meat processors and restaurants, also said the meat came from a completely legal plant in Illinois. And even though he didn't know the name of that plant, Worrilow said he was confident that the meat was inspected by federal regulators.

So where's this supposed African lion farm in Illinois?

Well, here's one clue: When the meat arrived at Il Vinaio on Tuesday evening, Selogie said it came in packaging with the name "Czimer's Game & Sea Foods."

Czimer isn't a free-range farm. It's a butcher shop located just outside of Chicago in Homer Glen, Ill.

Czimer's website advertises standard wild game: pheasants, quail, ducks, venison, buffalo and so on. But then, sprinkled through the product list, some wilder offerings pop up. Like llama leg roasts. Or camel cutlets.

And African lion meat. You can snag it in shoulder roast, steak, tenderloin or burger form -- or, for a bargain, try the ribs at $10 a pound.

So where does Richard Czimer, the company's owner, get these lions?

The meat is the byproduct of a skinning operation owned by another man, Czimer said in an interview with CNNMoney.com. He declined to name that gentleman.

"This man buys and sells animals for the skin, and when I need something and he has ability to get it, I will bargain for the meat. It's a byproduct," he said.

And where does that mystery man get the lions? "I wouldn't have any idea," said Czimer, who operates a small retail store in addition to his wholesale business. "He has his sources, and I do not infringe on his business, just as he does not infringe on mine."

He's willing to take a hands-off approach: "Do you question where chickens come from when you go to Brown's Chicken or Boston Market?" he asked.

Czimer's exotic-meat dealings have landed him in hot water before. Back in 2003, Chicago newspapers covered his conviction and six-month prison sentence for selling meat from federally protected tigers and leopards. Czimer admitted to purchasing the carcasses of 16 tigers, four lions, two mountain lions and one liger -- a tiger-lion hybrid -- which were skinned, butchered and sold as "lion meat," for a profit of more than $38,000.

His supply chain may be murky, but like the Arizona restaurateur and the meat salesman, he expressed total certainty that his lion meat is USDA-approved and thoroughly inspected by regulators before it reaches his processing plant.

But here's a twist: The USDA says it doesn't inspect lions bred for meat. That's the job of the Food and Drug Administration.

Is it legal to eat lions? Yes, according to the FDA's communications team. The African lion isn't currently a federally protected endangered species and it qualifies as a game meat, FDA spokesman Michael Herndon said in an e-mail.

While the African lion is not considered endangered by U.S. regulators, it is classified as "threatened" by the Convention on International Trade in Endangered Species, an international protection agreement.

As for Czimer, his shop is officially registered with the FDA and has been inspected by state regulators, Heardon said.

Meanwhile, back in Arizona, Selogie is taking the protests in stride. He plans to have bins of ice water outside for picketers who brave Arizona's 100-degree heat to protest as he serves up the burgers on Wednesday and Thursday night.

"I do feel bad that people are so concerned about this. But for most people, this is the king of the jungle and that's the only reason they can give me for their concern," he said. "We're not doing anything to endanger the species."