NEW YORK (CNNMoney.com) -- Stocks slumped Thursday, with the Dow losing 145 points, as investors mulled mixed reports on the economy and a sell-off in bank shares as Wall Street reform talk move toward a close. 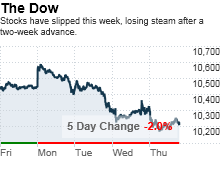 Stocks fell after reports showed a still-tough environment for the manufacturing and labor markets and one day after the Federal Reserve sounded a cautious tone on the economy.

The Fed issued a cautious growth outlook Wednesday on the back of the day's weak May new home sales report. That left stocks mixed to lower, but the tone turned even more negative overnight, with markets in Europe falling and U.S. stocks opening weaker.

"The Fed downgraded their economic outlook, which is not good for the markets," said David Chalupnik, head of equities at First American Funds. "It tells us that the economy is losing steam and earnings are at risk."

He said that markets are likely to be particularly volatile in July, as the second-quarter reporting period heats up, with many forecasts still too high relative to the current economic outlook.

Economy: The number of Americans filing new claims for unemployment fell to 457,000 last week from a revised 472,000 in the previous week, the Labor Department reported. Economists surveyed by Briefing.com expected 457,000.

Durable goods orders fell 1.1% in May, the Commerce Department reported. That was better than the 1.3% drop that was expected. Orders rose 3% in April.

Orders excluding transportation rose 0.9% in May versus forecasts for a rise of 1.3%. Orders ex-transportation fell 0.8% in the previous month.

On the upside, mortgage rates fell this week to the lowest level on record, a boon to individuals looking to buy a home or refinance. Freddie Mac said that the average rate for 30-year fixed loans fell to 4.69% from 4.75%.

However, in the statement the bankers said that while the economy is recovering, growth is likely to stay moderate for a while. Additionally, they were concerned about the weakness in the housing market and the "less supportive" financial conditions as a result of the European debt crisis.

Companies: Thousands of Apple fans lined up Thursday morning to buy the hugely anticipated iPhone 4, which is being released at Apple stores and other retailers Thursday including Wal-Mart Stores (WMT, Fortune 500) and Best Buy (BBY, Fortune 500).

Google (GOOG, Fortune 500) won a crucial copyright infringement battle with Viacom (VIA) Wednesday when a federal court ruled Google's YouTube isn't liable for its users' copyright violations. Viacom, which has been seeking more than $1 billion in damages, says it will appeal the ruling.

Oracle (ORCL, Fortune 500) shares dipped ahead of its quarterly profit report, due out after the close. The software maker is expected to earn 54 cents per share, up 17% from a year earlier, and revenue of $9.5 billion, up 38% from the prior year.

Currency: The euro was little changed versus the dollar, erasing earlier gains but remaining well above the four-year low of $1.188 hit last week. The dollar was barely changed versus the yen. The direction of the euro and the state of global debt are expected to be in focus at this weekend's G-20 meeting.

Look who's profiting from the oil spill