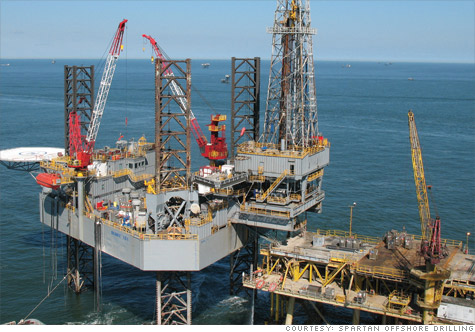 A Spartan Offshore rig, in better times. The rig is now idle, its contractors unable to get drilling permits. By Steve Hargreaves, Senior writerJune 26, 2010: 11:37 AM ET

NEW YORK (CNNMoney.com) -- The offshore drilling ban imposed after the BP disaster is only supposed to hit operations in deep water -- 500 feet or more.

But drillers in shallow water say they haven't been issued permits since the April 20 explosion. The delay has already forced hundreds of layoffs, and many more could be on the way.

Butler said that only one of his four drill rigs are operating; all four were drilling before the spill. Spartan has six contracts that would put his entire fleet back to work, but he can't get going until the permits come through, he added.

The week before last, Butler said he had to lay off 72 employees. Come Tuesday he'll have to let another 140 go.

Same is true at Hercules Offshore, the largest shallow water driller in the Gulf.

"The Department of Interior isn't issuing permits," said Jim Noe, a Hercules executive. "By mid July all of our rigs will be on the beach, and the workers without a job."

That could be a lot of jobs.

Jobs on the line: Deep water drilling, which is currently banned while an investigation into the Deepwater Horizon accident is underway, is estimated to employ at least 35,000 people on both the rigs and in jobs that support them.

Nearly that many jobs could also be at stake over shallow water drilling. While shallow water rigs are smaller and employ only about half as many people, there are almost twice as many of them in the Gulf, according to the Louisiana Mid-Continent Oil & Gas Association.

"Do not close down Louisiana's economy with this ill-conceived freeze," Lt. Gov. Scott Angelle said in a recent statement on the deep water ban. "Louisiana's offshore industry is critical to the economic survival of this nation."

Angelle is leading an effort to prod the administration into issuing shallow water permits as well, and is on a twice-weekly briefing call with federal officials on the matter.

"Every time he asks them how many permits they've issued, and each time the answer is zero," said Hercules' Noe.

Safety first: An Interior Department spokeswoman said there is no freeze on shallow water drilling. However, she said, new safety procedures were put in place following the Deepwater Horizon spill.

"Companies have to comply before we can issue them permits," the spokeswoman said. "No one has fully complied."

Spartan's Butler said there was a long delay between when Interior stopped issuing permits and when the new safety guidelines came out. Indeed, the first Interior Department notification to oil companies about the new requirements was dated June 8, nearly two months after the disaster.

Butler said he has been scrambling to get his paperwork in order and hopes that permits will be issued soon.

Shallow water drillers feel their operations are safer than the deep water operations like BP's.

The drillers say that an oil leak is easier to stop in shallow water, because the safety equipment is mounted right under the rig -- not a mile under the ocean surface. The geology is also better known and the water pressure is less. In addition, oil is easier to corral in shallow areas.

'System is broken': But others say that's not true, and believe the new safety requirements are reasonable. The massive Gulf oil leak, so far unstoppable, is one of the worst environmental disasters in American history. And it appears that a series of faulty industry procedures and shoddy government oversight are to blame.

"The system regulating offshore drilling operations is broken," Regan Nelson, senior oceans advocate at the Natural Resources Defense Council, wrote in a recent blog post. "A broken system could lead to additional failures, regardless of the depth of water."

Nelson noted that two bad oil spills -- one in Mexico in the late 1970s and one recently off the coast of Australia -- both occurred in shallow water.

"Until we have a better handle on what it takes to drill safely, the president's moratorium should cover all new drilling activities," she said.