Your own personal $129 cloud 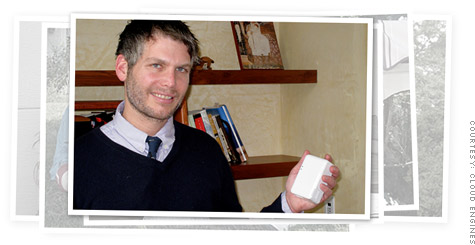 The San Francisco software entrepreneur knew he'd collected too many files -- videos, photos, songs, documents -- to keep on his personal computer. But for all his digital savvy, he couldn't figure out the best place to store his heaps of information. 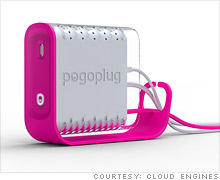 He could, for starters, buy a one-terabyte external hard drive for under $100. The drawback? When Putterman was away from his desk, he'd have no way to access the data.

Another option: Upload his files to the cloud, paying to store his data on remote servers run by companies such as Sugarsync.com, ZumoDrive.com and DropBox.com. Those services, however, would only let him store about one-quarter of his data -- for $250 or more a year.

Putterman, 43, began to wonder: Why hasn't anyone created a gizmo that plugs into your personal hard drive and connects it to the Internet, allowing you to access your files directly, from your own hard drive, anywhere? You'd have no service fees or upload quotas. A password system could grant chosen friends and colleagues access to your data, too.

In short, Putterman wanted to take the best elements of affordable, secure desktop storage and merge them with the versatility of cloud computing. So he decided to turn that idea into a company, Cloud Engines, and came up with a name for his gizmo: the Pogoplug.

Putterman talked about his idea to people everywhere he could -- at his daughters' swim lessons, on the airplane, in online forums.

"We knew people wanted it," he says.

Having vision was one thing; being able to follow through and build an actual machine is much harder. A hardware startup can require deep pockets to develop a tangible product and get it to market. That's why the big guys -- Sony, Dell, Apple -- dominate the information hardware industry.

But when Putterman decided to take the risk, capital followed. He launched Cloud Engines in 2007 and quickly landed $2 million in seed funding from influential investors, including PeopleSoft executive Peggy Taylor, Hotmail founder Sabeer Bhatia and early Google (GOOG, Fortune 500) investor Ron Conway. When Pogoplug was ready to hit shelves in the summer of 2009, Cloud Engines landed another $7 million from Boulder venture capital firm Foundry Group and $1 million in bank financing.

That kind of money, however, is a drop in the bucket for a hardware company. So Putterman also called on connections he made running Mediabolic, a software provider that linked DVDs and TV set-top boxes to the Internet. Putterman convinced chipmakers and a manufacturer to give him bulk pricing, even though his initial production runs were small.

And instead of hiring an expensive, top-tier industrial design firm, Putterman turned to Jordan Nollmann, a friend and former colleague who had left a large firm to start his own business, Sprout Studios. Nollmann agreed to accept payment only if Pogoplug was a success. "He helped get our company off the ground, and we helped get his company off the ground," Putterman recalls.

The result is a $129 device the size of a large paperback book. Pogoplug can connect to the Internet using Wi-Fi or an Ethernet cable and has four USB ports to link up with external hard drives. Users log into the company's website, my.Pogoplug.com, to access their files. The transfer rates are fast enough to stream videos and music.

"The team really executed," says Ryan McIntyre, managing director of the Foundry Group, the firm behind Pogoplug's largest investment. "Doing this for under $10 million in capital is unprecedented." (Personally, McIntyre says he likes using Pogoplug to share videos of his 6-year-old son, rather than uploading them to YouTube for mass consumption.)

With the technical hurdles behind him, Putterman still faces the challenge of luring the kind of consumers who are easily overwhelmed by the prospect of new, unfamiliar computer equipment, says Terri McClure, a storage analyst at Enterprise Strategy Group, a technology research firm in Milford, Mass.

"Hardware intimidates people," McClure says. "It's one more thing for them to plug in and maintain and use."

Putterman says his company's 20-person team focused on making Pogoplug as sleek and simple as possible. He claims that users can be up running in just two minutes, with no software to download and install.

In another cost-saving measure, Putterman scrapped the idea of paid advertising for Pogoplug. When the device hit stores last summer, he gave interviews to hundreds of bloggers, posted on Twitter and created a standalone Web site, Pogoplugged.com, where users could gather for uncensored discussion of the product.

"It was a risk," Putterman admits. If people hated the Pogoplug, his company could have died fast and publicly.

Instead, Pogoplug went viral. The device generated significant online chatter and worked its way into more than 500 news articles

Pogoplug's sales rose ten-fold at online stores such as Amazon.com (AMZN, Fortune 500) and Buy.com over the past year. That caught the attention of brick-and-mortar retail chains. This year, Pogoplug will be on shelves of 2,000 U.S. retail locations. About 50,000 units have sold since November, and Cloud Engines expects to hit $15 million in sales this year.

"It scratched the itch," says David Sparks, an Irvine, Calif., lawyer who reviewed and blogged about the Pogoplug on his site, MacSparky.com. "You think, 'Wow, how come nobody else thought of that?'"