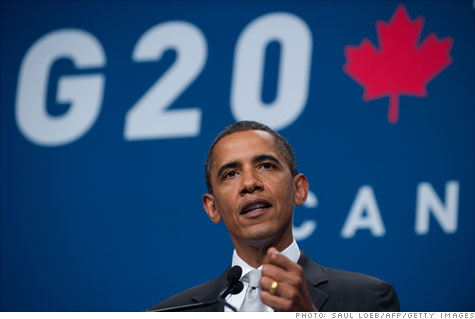 Obama said on Sunday that he would deliver serious deficit reduction proposals next year. And when he does, those politicians who talk tough on debt simply to score votes will have to show their hand, he said.

"When I start presenting some very difficult choices to the country, I hope some of these folks who are hollering about deficits and debt step up, because I'm calling their bluff," the president said at a press conference during the G-20 summit in Toronto.

Of course, such a pledge works both ways. Tried-and-true deficit hawks -- in and out of Congress -- will be ready to call the president's bluff if his 2012 budget proposal, due out in February, doesn't meet their standards for substantial deficit reduction.

"Time has run out," said Bob Bixby, executive director of the Concord Coalition, a nonpartisan deficit watchdog group. "He really is going to have to be serious in February. There's no more calling for commissions or saying we have to address this in the future."

To date, Obama has made mostly symbolic steps toward fiscal restraint, budget experts say. For example, he has called for a three-year freeze on non-defense discretionary spending and imposed tougher requirements on lawmakers to pay for new proposals.

What's more, Bixby said, the pledge made at the G20 summit for member countries to cut their annual deficits in half by 2013 isn't as big a deal as the leaders made it sound. Economic growth alone can accomplish much of that reduction, he said. "It's really where you go from there."

Budget experts say Obama needs to attack the real problem: the so-called structural deficit, which will continue to balloon faster than the economy grows. The structural deficit is made up primarily of spending on Medicare, Medicaid and Social Security.

And that deficit is made worse by a tax system that is projected to consistently bring in less revenue than needed to pay for total spending.

"I hope Obama challenges them both and says, 'We're going to have to put entitlements on the table and taxes on the table. And here's my plan,'" Bixby said.

The president may draw a number of his proposals from the work of an 18-member bipartisan fiscal responsibility commission that he created to make recommendations for putting the budget on a fiscally sustainable track for the long run.

It's not clear yet what will come from the commission, which will deliver a report to Obama on Dec. 1. But deficit experts have identified many measures that could notably improve the country's debt trajectory. Among them:

Let the 2001/03 tax cuts expire: If the series of tax cuts implemented during the Bush administration are allowed to expire at the end of this year as scheduled, it could save up to $3 trillion over 10 years.

Make changes to Social Security and Medicare: Spending on these two programs is on track to grow faster than the economy, and retirement and budget experts have called for any number of measures to curb that growth. These include raising the retirement age, increasing the taxes higher income workers pay into Social Security, raising Medicare premiums and slowing the growth in future benefits for both programs.

Cap tax expenditures: The government does without roughly a trillion dollars a year because of tax breaks -- everything from the mortgage-interest deduction, to education and child credits, to low rates on investments.

Those breaks can translate into higher tax rates and a federal budget that is much bigger than advertised, according to tax experts Len Burman, a professor at Syracuse University, and Edward Kleinbard, a professor at University of Southern California.

Reduce defense spending: Defense spending has accounted for more than half of all discretionary spending in recent years. And there have been growing calls to cut it back with proposals such as terminating funding for outdated weapon systems to curtailing involvement in the wars in Iraq and Afghanistan.

How would you stabilize the debt?