Should executives be paid with debt? No! 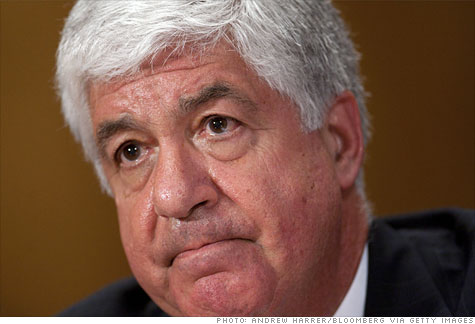 FORTUNE -- As investigators comb through the wreckage of the financial meltdown, one fact remains clear and startling: Credit default swaps and collateralized debt obligations, as well as debt and equity from large financial firms were useless as indicators of fiscal health. One of the biggest revelations has been the utter failure of markets to capture the relevant information required to set accurate prices on securities.

And yet, despite the lessons learned that market pricing can be way off the mark, tying executive pay to equity values has historically been encouraged. Now the use of equity and other financial instruments in compensation is slated to be set into law in Europe, and AIG (AIG, Fortune 500) has just announced a plan to compensate executives partially based on the performance of its debt. Can this possibly work?

According to the Financial Times, "Under legislation expected to pass the European parliament next week," half of any undeferred bonus "would have to be paid in shares or in other securities linked to the bank's performance." Thus, the value of at least some portion of bonus will be based on the value of equity securities or other securities whose prices are set in the global capital markets and dependent on their whims.

It is hard to see how this is a step in the right direction. What once seemed like a sound way to ensure executives were invested in the future health of the company has turned out to be little more than an incentive for them to obscure risk and financial data in order to maximize their own personal profits. The main draw for corporations to tie their market performance to executive compensation is that it sounds good, and in the case of debt based pay, it sounds tough. But is it?

Despite the popularity of stock as a mechanism for compensating executives, it has not worked well. The newspapers tell us that the prospect of higher equity pay has led to greater risk-taking and financial scandals. Equity prices also violate two tests for good compensation design: (1) can managers control the outcome of the measure? (in this case stock price) and (2) if they can control it, is it an outcome we really want managers focused on? Manipulating stock prices is the last thing shareholders want. Therefore, both empirically and theoretically, tying pay to equity is not a good choice.

The new EU measure makes other options available, however, when it says that rather than shares "other securities linked to the bank's performance could be used". For companies, two such securities come to mind: debt and credit default swaps.

This more novel compensation technique received a vote of confidence in a May 28 filing with the SEC by AIG. Under the revisions, some of their executives' bonuses will now be tied to its debt, instead of its equity.

AIG will be basing 80% of the value of its bonuses on its junior debt and 20% on AIG's stock. As at most financial firms, bonus pay can make up a healthy percentage of executives' overall compensation.

But is tying pay to debt, even as a partial solution, really the answer? Harvard Law School professor Lucian Bebchuk has argued in a series of papers prepared for the Investor Research Responsibility Center Institute that it is. On the face of it, debt based pay sounds exotic and almost punitive towards executives. Yet the problems with the strategy are remarkably similar to those experts warn about in regards to paying executive with stock.

That brings us to the other useful test for payment mechanisms like this one: Even if managers could control outcomes, are they outcomes they should be striving for? For example, the price of debt also responds to the perceived riskiness of a company, as represented by its credit rating. Managers can control their firms' risk levels, but not credit ratings. Should managers, in the wake of Lehman Brothers' Repo 105 accounting gimmick, be paid in a way that creates incentives to mislead credit raters or bondholders as to the riskiness of a company's debt?

Credit ratings of course have been wildly off the mark, in cases such as Enron and the CDOs at the heart of the financial crisis. And issuing more debt, just so executives can be paid in it (a possibility created by this arrangement) seems misguided.

Another alternative to equity and debt is one advocated by Columbia Business School professor Patrick Bolton: tying executive pay to the spread on CDS -- or, more precisely, to deviations of a bank's CDS spread from the market average.

Bolton claims that CDS spreads are pretty good predictors of default within a year or so, but the use of CDS spreads also relies on the ability of the market to perceive and properly price risk. As the financial crisis has made painfully clear, especially in the case of opaque financial-services firms such as AIG and more recently the squabble between the firm and Goldman Sachs (GS, Fortune 500) over CDS pricing at the FCIC hearing yesterday, markets can be and are often quite bad at evaluating risk accurately.

Clearly, compensation should incentivize managers to focus on good long term outcomes for the companies they run and shareholders they report to. But inside information is always more complete than the external information that markets are given to process. In other words, pricing of any corporate instrument -- debt or equity -- is always going to be imperfect. So why give executives a chance to exploit that information gap for personal gain?

Companies that perform risk management, like big banks, will always have more and better information on risks (including future risks) than what the market has from the limited information those companies have to disclose.

While tying pay to risk-adjusted performance metrics based on solid internal information that managers can and should control is more difficult to explain and implement than handing out stock options or bonds, it's a much better solution to keeping executives on the straight and narrow than equity, debt or CDS-spread based pay is.

Designed properly, the incentives for financial-institution executives can be matched with performance metrics that managers can and should actually control. That would keep big banks' customers, bondholders and shareholders interests aligned with each other and with management -- an arrangement that might just be the secret to preventing financial crisis déjà vu.

AIG villain: I would have saved taxpayers money