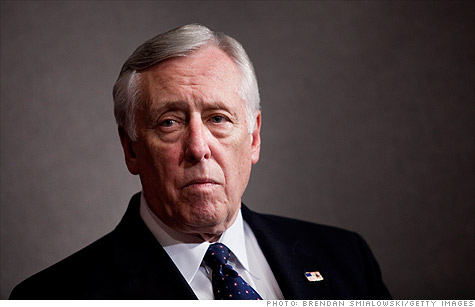 NEW YORK (CNNMoney.com) -- Odds are good that the middle-class will get to keep their tax cuts. The question now is for how long.

The 2001 and 2003 tax cuts expire in six months. President Obama had promised to make them permanent for the majority of Americans. But the reality of the federal budget's impending shortfalls is making that a hard promise to keep.

Indeed, some influential players in Washington have signaled that it's no longer a given that the tax cuts will be made permanent, at least not right away.

The most prominent Democrat to suggest as much is House Majority Leader Steny Hoyer, D-Md. In a speech last month, Hoyer said point-blank that lawmakers can't ignore the budget consequences of extending the cuts.

"We need to have a serious discussion about their implications for our fiscal outlook, including whether we can afford to permanently extend them before we have a real plan for long-term deficit reduction," Hoyer said.

In May, conservative economist Martin Feldstein, who was President Reagan's top economic adviser and now sits on Obama's recovery advisory board, wrote in a Wall Street Journal commentary that while he favors temporarily extending the cuts for everyone, the country can't afford to make them permanent.

The cost of doing so for everyone would top $3 trillion over 10 years. Making them permanent for families making less than $250,000 -- which tracks with Obama's promise -- would cost less but not much less: an estimated $2.2 trillion.

Two prominent Senate Democrats recently told The Hill, a newspaper that covers Congress, that the $250,000 threshold is not necessarily a done deal with Congress.

Meanwhile, the House Ways and Means Committee is considering a one-year extension of the tax cuts for families making less than $250,000, according to a report in Congress Daily. The extension would be accompanied by a two-year "patch" to protect the middle class from getting hit by the Alternative Minimum Tax. The estimated cost of those measures combined is $270 billion over 10 years.

Looming over the debate about extending the tax cuts is the mid-term elections in November.

Republicans who like to campaign as deficit hawks are portraying the potential change in direction on tax cuts as a betrayal of Obama's promise to the American people. Spending, they say, is what needs to be cut to tame the growth in debt.

Budget and debt experts, however, have said repeatedly that the magnitude of changes needed to bring better balance to the U.S. fiscal situation will require changes both to the spending and tax sides of the ledger.

They acknowledge that an immediate increase in taxes could harm the economic recovery. They favor extending the cuts for a short period of time but not making them permanent. Any long-term extension would constrain lawmakers as they consider broader tax reform.

Republicans and fiscally conservative Democrats have blocked benefits for the long-term unemployed because they would add $33 billion to the deficit. So it's easy to think there would be even more opposition to a one-year extension of the tax cuts that would cost almost 10 times as much.

Ironically, though, there could be less pushback.

"Sometimes it's easier to do things that are bigger rather than smaller," said Clint Stretch, managing principal of tax policy at Deloitte Tax LLC. For instance, he said, it might be easier to vote for a $270 billion package because it will benefit far more Americans than the far less expensive extension of unemployment benefits.

But there will likely be plenty of objections along the way, especially in the Senate, Stretch said. Among the potential points of disagreements: Should the tax cuts be extended temporarily for everyone, or everyone except high-income households? Should the cuts be extended for one or two years? And should the extension be paid for, even though it's not required?

The jury is also out on when Congress will take up formal legislation on the issue. Since the legislative agenda is so back-logged, especially in the Senate, a tax-cut extension bill might not come up for a vote until after the mid-term elections.

But there's good reason to believe it may come before, Stretch said. "It's hard to understand why you'd want to campaign defending your inaction on the middle class."