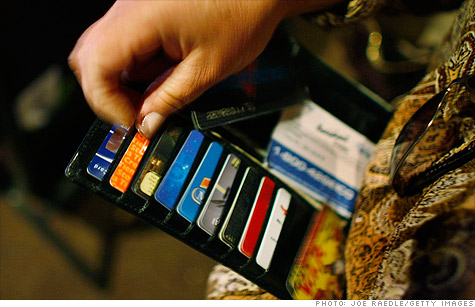 Ileana Garcia looks in her wallet for credit cards she wants to melt over a hot plate at the Miami Vineyard Community Church on March 7, 2009 in Kendall, Fla. By Annalyn Censky, staff reporterJuly 7, 2010: 8:11 AM ET

NEW YORK (CNNMoney.com) -- Americans are not as far behind on their bills as a year ago.

The number of consumers behind on their credit card payments fell to an eight-year low in the first quarter of 2010, the American Bankers Association said Wednesday. Overall, delinquencies across a wide-range of consumer debt categories have also fallen.

High unemployment and plummeting home values during the financial meltdown appear to have spurred consumers to shore up their finances and banks to limit their lending, resulting in fewer Americans being late with payments, the industry group said.

About 3.88% of bank credit card accounts were past due by 30 days or more in the first quarter of the year -- the first time since 2002 that the rate has fallen below 4%, the ABA said Wednesday.

And ABA's composite ratio, which tracks delinquencies across eight key categories, fell to 2.98% from 3.19% the previous quarter -- a sign of modest improvement in the U.S. economy, the group said.

The ABA's report confirms what other government studies have shown: Americans appear to be taking a more prudent approach to their finances.

The Commerce Department's most recent reports on personal spending and income showed consumers stashed a higher portion of their earnings into savings in May than they did a month earlier.

But while Americans may be more careful with their money, that doesn't mean the economy is a bed of roses.

Unemployment, at 9.5%, is still high 9.5%. There was a loss of 125,000 jobs in June. That was the first month of job losses in a year. And that doesn't include the record-high 1.21 million so-called "discouraged workers" who want to work, but aren't even looking because of the weak labor market.

What pay should you expect now?

I deserve a raise. Do I dare ask for one?