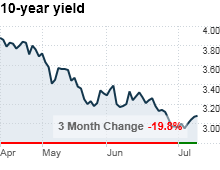 Total retail sales fell 0.5% to $360.2 billion last month. Economists surveyed by Briefing.com expected that sales would slip by only 0.2%. The downbeat data pushed investors toward the safe haven of bonds, pulling prices higher -- even though bond prices often fall ahead of auctions.

The Treasury Department auctioned $13 billion in 30-year notes Wednesday, as part of its sale of $69 billion worth of notes and bonds this week in quarterly refunding. The sale's bid-to-cover ratio -- an indicator of investor demand for the bonds -- was 2.89, slightly higher than that of the last long bond sale.