Is the U.S. battery business for real? 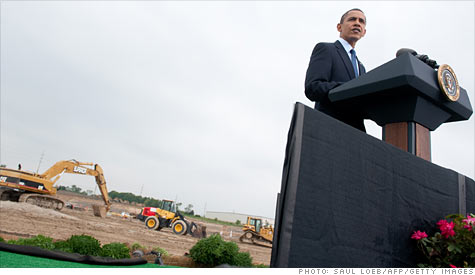 NEW YORK (CNNMoney.com) -- President Obama is once again stumping for stimulus at one of his favorite spots: a plant that makes batteries for electric cars.

These plants have been a high profile piece of the controversial stimulus package, and Obama has visited at least four of them since stimulus was enacted. Dozens of projects dedicated to advanced batteries have received over $2 billion in federal funding as part of the administration's $800 billion-plus plan to revive the economy, create jobs, and push the manufacturing sector into the 21st century.

"These are jobs in the industries of the future," Obama said Thursday at the groundbreaking of the Compact Power plant in Holland, Mich.

The plant, owned by the Korean company LGChem, will employ up to 300 people and produce batteries for the Chevy Volt and electric Ford Focus. "So when you buy one of these vehicles, the battery [will] be stamped 'Made in America' -- just like the car," said Obama.

But public scorn over Obama's spending has been running high, and domestic battery manufacturing faces serious challenges. Can it compete with imports from the more experienced Asian companies? And will people actually buy electric cars?

Batteries, made in the USA: In the short term, the industry's challenge is to not overproduce. As these plants come online questions remain over just how fast consumers will adopt the new technology.

But long term, analysts seem to think the U.S. battery business will be viable and that government support at this early stage is a good idea.

"In a world that's becoming more mobile and more electrified, the United States was late to the game," said Xavier Mosquet, a Detroit-based senior partner at the Boston Consulting Group. "A comeback in this industry is critical. Any investment is important."

Mosquet thinks batteries will ultimately be built in the United States, not imported from Asia. The real cost in batteries is the technology and materials - not the labor - which takes away some of the Asian advantage. Plus, they are heavy, making them expensive to ship.

Buying into electric cars: As for consumer demand, he said Boston Consulting research has shown that there's a small percentage of the population that's willing to buy electric cars for the environmental or geopolitical benefits, even if it means paying a bit more. Plus, he expects the cost of the batteries to come down 60% to 75% in the next five years, making these vehicles more attractive to cash strapped Americans.

Ten battery plants are either built or under construction in the country. If they all came online at full capacity in the next year or two, he said there could be an oversupply. But he said the plant's owners know this, and aren't planning on ramping up to full production until the demand is there.

Electric deliveries: Other analysts also said the demand in the consumer sector may be slow to take off, but once fleet vehicles are factored in, there shouldn't be an oversupply problem.

Besides price, one of the biggest concerns keeping consumers from buying an electric car is running out of juice in the middle of nowhere - a mind set in the industry knows as "range anxiety."

But fleet vehicles - think delivery trucks or taxis - are prime contenders for electric power. They tend to either operate the same route everyday or stay in a small geographic area and can be charged or have their batteries swapped out at fixed points.

"It's unclear if consumers will adopt electric vehicles," said Elaine Kwei, a clean tech analysts at the investment bank Jefferies & Co. "But people tend to overlook fleet vehicles. They are a perfect fit."

Jessie Pichel, head of clean tech research at Jefferies, added that the batteries could also be used to store power produced from renewable energy like wind and solar. Using energy from these sources as a major supplier in the electric grid - which requires a steady flow of power - has so far been a challenge, as the wind doesn't blow all the time and the sun doesn't shine at night.

"We believe very strongly that renewable energy can be a big employer," said Pichel. "And there's no reason the U.S. can't be a leader in this."

The skeptics: Not everyone thinks battery manufacturing will find a permanent home in the Untied States.

Asian countries - specifically Japan, South Korea and China - is where other battery powered items like like laptops, mobile phones and power tools are made, said Julius Pretterebner, a vehicles and alternative-fuels expert at IHS Cambridge Energy Research Associates.

As long as that big secondary market remains in Asia, so will car battery manufacturing.

"The future of transport is electric," said Pretterebner. "But unfortunately the products will come from Asia."