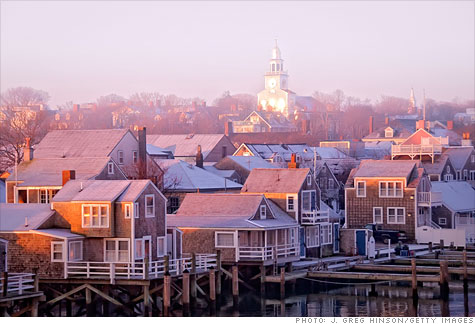 FORTUNE -- In the past decade, Nantucket Island has served as a barometer for the fortunes of Wall Street. The glass cracked after years of unsustainable pressures. But almost by magic, the barometer is rising once more even as something new and unexpected has come to the summer paradise: foreclosures, short sales, failed auctions, and a skinnier municipal budget. And while financiers can cut and run, it's the locals who are being hardest hit.

"It's two different markets," says Brian Sullivan, a broker for Maury People Sothebys. There's Wall Street, and everyone else. You can see that on Yahoo's real estate listing for distressed properties on Nantucket: nearly two-thirds are listed for under $1 million, the price sector dominated by the island's 12,000 year-round residents. But the banks have basically turned their backs on small borrowers, so anyone who does want to buy will have a hard time getting a loan. "They want to lend to people borrowing $1.5 million and up," says Sullivan.

The tight financing explains part of the problem of foreclosures, a word that hasn't been whispered on Nantucket since the savings and loan system blew up in the early 1990s. In the first six months of 2010 foreclosures accounted for 20 of 163 sales -- twice the 2009 rate.

"If you could breathe, you could get a mortgage," says David Callahan, co-owner of Jordan Real Estate, of the salad days. That's how one home bought for $356,000 ended up selling on the auction block for $425,000. But that didn't help the owner, according to Callahan, a small businessman in construction. He had used the home as a piggy bank, borrowing "half a million dollars" for all kinds of "toys." As in so many places across the U.S., optimism triumphed reason, bringing disaster to the weakest links in the economy.

Jobs for residents simply evaporated when Wall Street vacationers pulled back. No one expected building permits to plunge as they did last year to 43, the lowest number since the town began keeping records in 1972.

Brokers like to say the market has re-priced by about 25%. Other barometers show a much more dramatic drop in value -- with some properties now selling for close to half the value the town assessor had derived for tax purposes. That also hasn't happened since the savings and loan crisis, when homes sold on average for as 72% of assessed value, according to data assembled for Fortune by Rob Ranney, an appraiser for Denby Real Estate.

"Assessments are a snapshot of the market in the rearview mirror," says Deborah Dilworth, town assessor. They tell you were prices have been. It's been a long way from there to here. Just take a look at Brian Sullivan's real estate blog which compares recent sales to assessed values - now based on 2008 sales. There's the house at 66 Squam Road, bought for $1.08 million, assessed at $1.86 million; the home on 1.2 acres at 47 West Chester, picked up for $900,000, but assessed at $1.86 million.

At least those properties are selling. The island has seen failed auctions, the most spectacular for Point Breeze, a 19th century hotel, that went belly up after an investor decided to renovate at just the wrong moment. That's how TD Bank got stuck with a $40 million note. An auction in February attracted just one bidder for $5 million; the bank kept the property.

Like a bad crab, some sales seem OK until you crack them open. That's the story of 15 Top Gale Lane, a prime waterfront home. Once owned by commercial real estate developer Scott Lawlor, who never got to move into the newly built structure, because as Callahan puts it, he was a little too long on real estate.

Lawlor had alreadylost the John Hancock building in downtown Boston after his company defaulted in 2009 on a note then worth $525 million, but was scrambling to keep on top of mortgages in Nantucket and Greenwich, Ct. The home was unsurprisingly bought by a financial executive who prefers to remain anonymous for $19.2 million. Scarce trophy properties on the waterfront maintain their values even when sellers are anxious to move on.

Vultures on the island

It's bargain hunters in the rest of the market who are feared, courted, and rebuffed. No one wants to sell too cheaply and yet they long for buyers. Jacquie and Bill Colgan of Summit, NJ, were determined bargain hunters. And they got their whale -- a 10,000-square-foot bank-owned house for $1.175 million -- about half it's true worth, says John Merson, a local investor whose renovated 18th century home is about 60% rented this summer. People like the Colgans are a mixed blessing for Nantucket.

They will give the house a much needed facelift, ridding it of mold, renovating, and fixing the landscaping. And they envision the home as a multi-generational gathering place for years to come. But they are importing their own crew of workers to repair the house. The locals are just too expensive, even now, says Jacquie Colgan.

Thanks to the rising fortunes on Wall Street, sales in the first six months of 2010 have more than doubled to $246 million; of course, 2009 was amazingly anemic. But optimism is rising. Sullivan estimates that a recent bump in high-end transactions will translate into meaningful work for locals in the next 8 to 15 months. Last year, he said things were so grim, he saw no way out.

But now Wall Street vacationers are spending money freely once again, especially since July 4th weekend, when the super rich seemed to have finally returned, wallets open,. That week, ex-Goldman Sachs (GS, Fortune 500) honcho Jon Winkelried finally signed a contract to sell his property for just below the new asking price of $29 million -- an island record and a figure that has some island residents shaking their heads in wonder: What year is it, again? Of course, when Winkelried put the waterfront property up for $55 million in 2008, that was an asking price no one took seriously then, either.

And then there's this, says Sullivan: The 14-mile-long island has only about 8% of land available for private construction. The laws of tight supply and strong demand will eventually kick in to restore the economy to health.

So it seems the party lights are going back up, at least around the prized Nantucket waterfront, restoring some of the glow to the "faraway land" - one translation for Nantucket and a name ripe for fantasy literature. But the party is mostly cash only. And it's strictly B.Y.O.B. -- bring your own bug spray. The town has stopped spraying for mosquitoes last year. (Assessor Dilhurth, insists the spraying program was eliminated because it didn't work, not as a budget casualty.)

But here's the point: The pullback came amid the worst economic downturn in island memory and has affected every line item for the town -- from the fire department to sand purchases for the winter icy roads when Wall Street SUVs remain parked in clapboard garages. Echoing the problems of local and state governments nationwide, there's even a municipal hiring freeze to help manage the budget.

The year-round residents are happy to see the twinkle slowly return to the waterfont. But for now inside Nantucket, patches of darkness prevail for those mowed down by the excesses that took place on another island about 200 miles west-southwest of here. And in the darkness, the mosquitoes buzz.

The man who walked away from Goldman Sachs