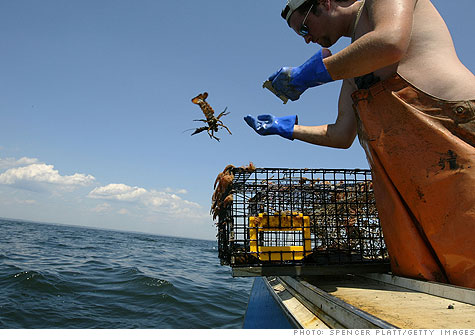 Lobsterman Sean Nelson throws a premature lobster back into the waters of Long Island Sound, where a disease has wiped out much of the population since 1999. By Aaron Smith, CNNMoney.com staff writerJuly 20, 2010: 3:19 PM ET

NEW YORK (CNNMoney.com) -- Consider the lobster: The population of the crustaceans is at such low levels along the East Coast that a regulatory agency is proposing a five-year ban on harvesting them between Cape Cod and Virginia.

"Long Island Sound, in particular, has been in poor health since 1999," said Toni Kerns, senior fishery management plan coordinator at the Atlantic States Marine Fisheries Commission. "We had a die off in the fishery."

On Thursday, the technical committee of biologists for the Atlantic commission is meeting in Warwick, R.I., to discuss the proposal. They have the final authority to shut down lobstering in these coastal waters.

The ban, however, would spare Maine, where lobsters are thriving. Last year, fishermen pulled in 75.6 million pounds -- the largest take in years, according to state records and estimates. The harvest raked in $223.7 million -- although that was about $22 million lighter than in 2008.

Nearly 90% of the nation's lobsters come from Maine, according to George Lapointe, commissioner of the Maine Department of Marine Resources. He estimates that only 4 million pounds of lobsters were produced in other states last year, so the ban won't have a large practical impact.

He argues the ban won't necessarily lift lobster prices -- as many fear, because Maine lobstermen already have the market cornered, with or without a moratorium in other states. (Lobsters currently sell for an average of $4.50 a pound for hardshell and $3.50 for softshell, according to Kerns.)

"There have been people making allegations that we're doing this to price markets," said Lapointe. "Just the idea that it's going to somehow be a boost to our fishery is not based on any information that I've seen. So there's no economic boom that I see from our discussion in southern New England."

Susan Povich, co-owner of the Red Hook Lobster Pound, a lobster retailer in Brooklyn, N.Y., says she doesn't foresee any change in prices, even if the ban goes through.

"It's not going to affect my business because I get my lobsters from Maine," said Povich, whose husband and co-owner, Ralph Gorham, drives 300 miles to Georgetown, Maine, every week to bring live lobsters back to Brooklyn.

"I don't know anyone who sells Southern lobsters, New York lobsters," said Povich. "I hope [the ban] rejuvenates the population. I'd love to sell local lobsters."

But even if the crustacean population bounces back after the potential ban, there might not be anyone left to harvest after five years, worries David Simpson, director of the marine fisheries division at the Connecticut Department of Environmental Protection. He's concerned about the declining number of professional fisherman and fears that their berths will be replaced by sailboats.

Of the 250 lobster permits issued in Connecticut, there are only 20 to 40 professionals "who make a substantial portion of their income from lobstering," he said. That's compared to more than 6,000 permits in Maine, of which 1,600 would be considered full-time professionals, said Lapointe.

"If we close that space for five years, it's not going to be a matter of turning a switch to get it back," he said. "It would be very hard pressed to gain that toe hold on the shoreline. They won't have a space to tie up their boat anymore."