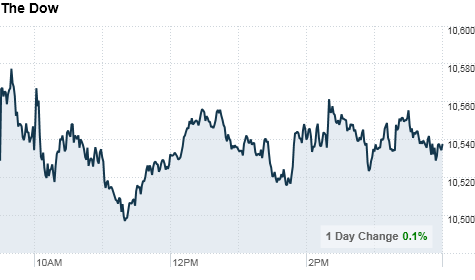 Consumer confidence declined in July, according to the Conference Board's closely watched index, which fell to 50.4 from an upwardly revised 54.3 in June. Economists surveyed by Briefing.com thought the index would decline, but only to 51. The report served to underscore the weak outlook for consumer spending heading into the fall, and caused stocks to erase early gains.

"The consumer confidence index was below expectations but not surprising," said David Chalupnik head of equities at First American Funds. "We had a down market in May, June and early July, and that weighs on consumer spending and confidence."

Better-than-expected results from a number of companies had propelled markets in the morning, extending the recent rally. But that advance lost steam, with technology and consumer stocks hit the most.

Tellabs (TLAB) reported higher quarterly sales and earnings that beat estimates and lifted its fiscal second-quarter outlook. But shares of the communications gear maker dropped on concerns that it will lose some of its business building wireless networks for AT&T to a rival vendor. Shares fell 5.9%.

With just over one-third of the S&P 500 having reported, Earnings are currently on track to have risen 34% from a year ago, according to earnings tracker Thomson Reuters.

Chalupnik said the gap between economic and earnings news reflects that U.S. companies benefit from exposure to strong emerging markets and a not-yet slowing European economy, offsetting the weakness in the U.S. economy.

Housing: The Case-Shiller 20-city home price index rose 1.3% in May versus April and up 4.6% from a year earlier, suggesting pricing has stabilized.

Currencies and commodities: The euro fell against the dollar, while the U.S. currency gained versus the Japanese yen.

U.S. light crude oil for September delivery settled down $1.48 to $77.50 a barrel on the New York Mercantile Exchange.

Bonds: Treasury prices fell, and the yield on the 10-year note climbed to 3.05% from 2.99% late Monday. Bond prices and yields move in opposite directions.

Market will drift for rest of summer