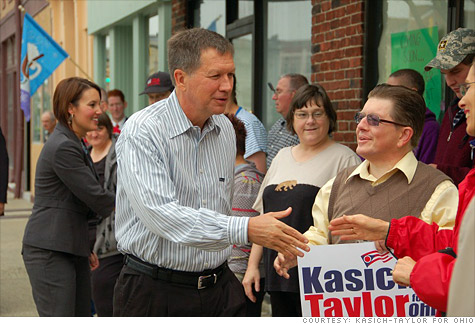 FORTUNE -- Poor John Kasich. When he made that fateful decision in January 2001, he was just doing what politicians have done since time immemorial: he was taking a cushy Wall Street job between a couple of public office gigs in order to pad the family pocketbook.

After serving nine terms as a Republican in Congress and realizing that a presidential run was not yet in the cards, he signed on as an investment banker at Lehman Brothers. Back then, Lehman still had several years to go on its upward trajectory before it collapsed in a heap in September 2008. Today, all Kasich wants to do is be Governor of Ohio. But his opponent, incumbent Governor Ted Strickland, is gleefully making hay of Kasich's Wall Street ties, as if the very fact that Kasich worked for Lehman is enough to disqualify him from high office.

What's a man to do? Well, this one started by pretending those seven years didn't happen. On the web site of John Kasich for Governor of Ohio, you'll find nary a mention of Lehman or Wall Street. Instead, you'll find platitudes like this one: "his entire career has been about making a difference." It seems Kasich may actually agree with Strickland that working at Lehman was a bad thing. Otherwise, why not mention a job he held for nearly a decade?

Don't try calling his campaign to ask about Lehman Brothers, either. Like so many campaigns these days, you won't find a phone number anywhere on Kasich's site. Send an email, you'll get no response. Track down some state GOP people and ask for the phone number of his headquarters and they'll act like they're protecting Brad Pitt's privacy, telling you they're not authorized to give out that number, but that they'd be pleased to pass along a message for you.

Here's a message for Mr. Kasich, then: Most of us don't have a problem with working on Wall Street per se. This writer, in particular, wrote one of the few positive books about a financier to be released in recent years -- Last Man Standing: The Ascent of Jamie Dimon and JPMorgan Chase. All we want to do is talk to you about it. We actually have some serious questions for you about the bailout, the state of Wall Street, and the imperatives of effective financial reform. Like Bill Frist and his medical expertise, you might be that rare politician who actually understands what Wall Street does. (Did you watch the Goldman Abacus hearings? Some of those elected representatives lack even the most rudimentary understanding of a broker's function.)

But then again, you might not. Mr. Kasich: if you're not ashamed of cashing in on your Wall Street connections, why all the subterfuge? But if you are ashamed of it, just what is it that you're ashamed of?

After all, it's not like you broke new ground. As the New York Times pointed out when you were hired, you were simply traveling the "well-trodden path between Washington politics and New York high finance." In other words, everybody has done it, John, so what are you worried about? Two of our most prominent recent Treasury Secretaries came from Goldman Sachs (GS, Fortune 500) -- Bob Rubin and Hank Paulson. Vernon Jordan practically lives in the intersection of finance and politics. Heck, even John Edwards took a sabbatical at private equity/hedge fund firm Fortress Investment Group (FIG) between campaigns. Although Edwards' explanation -- that he wanted to understand more about how Wall Street worked so as to be better able to help the poor -- was laughable. We'd ask Kasich why he was motivated to work at Lehman, but we can't get the man on the horn.

Under pressure from local media, Kasich recently released his 2008 tax return that showed he earned nearly $600,000 from Lehman that year. That's not much, relatively speaking, but that was also a very bad year for Lehman. It would be interesting to know what he was paid in 2004 or 2005, something Mr. Kasich's campaign refuses to reveal. And even when he's spoken about Lehman, he's been brief. "Here's the truth," he said in a campaign advertisement. "I didn't run Lehman Brothers. I was one of 700 managing directors. I worked in a two-man office in Columbus."

Truth be told, we're not sure where we're supposed to go with that. Is he trying to say that the folks at Lehman had no interest in John Kasich being in charge of anything but a two-man operation? (If he was even in charge of that.) What kind of message does that send to the voters of Ohio?

Behind the war between Obama and big business

Fat cat pay - Then and now
Subscribe to Fortune