Why fears of hyperinflation won't die 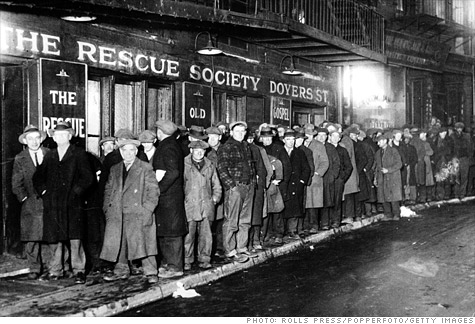 FORTUNE -- Deflation may be on Federal Reserve Chairman Ben Bernanke's tongue, but inflation is wagging in at least one corner of the economy. Obscure books analyzing the causes and consequences of bone-chilling inflation in Germany following World War I are now hot commodities.

Jens O. Parsson's out of print economic treatise, Dying of Money: Lessons of the Great German and American Inflations, is selling for $249.90 on Amazon, while an old hard-cover copy of Adam Fergusson's When Money Dies: the Nightmare of the Weimar Collapse was recently offered at $1,705.63. A rushed paperback UK edition of Fergusson's book has held onto the number one spot for business books on Amazon UK for more than twenty-six days and is now climbing Amazon's US rankings, while a scan of Parsson's previously unavailable book has been posted online for the hand-wringing masses worldwide.

Much like the stifling hyperinflation they describe, it remains unclear where these books first gained traction or exactly when they did. Reports indicated that the rush may have been spurred by the value-investing sage Warren Buffett, who allegedly had an Oprah moment and recommended Fergusson's book to some banker friends. However, Buffett has since denied that report, saying he never heard of the Thatcherite's circa-1975 tome. And even if he had, that doesn't account for the fact that Dying of Money has become an inflated commodity as well.

But it's easy to see why both books have found a ready audience among those now fearful that the great debt bubble being nursed along by the world's teetering governments will one day end in the sort of inflation that takes both the breath and the bread away. Who wouldn't be scared by passages about the civil unrest that followed Germany's economic collapse, such as this one describing how a hungry mob descended upon one quaint farm: "The cow-shed was drenched in blood. One cow had been slaughtered where it stood and the meat torn from its bones. The monsters had slit up the udder of the finest milch [stet] cow, so that she had to be put out of her misery immediately."

For those who don't scare easily, how about this fact gleaned from Parsson's book, which also discusses the dismal state of American inflation that ran from 1939 through the 1970s: "[A]ll the marks that existed in the world in the summer of 1922 (190 billion of them) were not worth enough, by November of 1923, to buy a single newspaper or a tram ticket." Ouch.

Of course, there is little evidence we're currently sliding into such an economic meat-grinder. Bernanke recently told Congress that inflation was slowing and that there was no indication that it would speed up anytime soon. The consumer price index for all urban consumers has only increased 1.1% over the last twelve months and it declined 0.1% in June. And the languid bond market seems to agree, snapping up two-year Treasuries at previously unheard of low yields.

Plenty of people agree with Bernanke's view of the situation. Bob McTeer, a fellow at the National Center for Policy Analysis and a former president of the Dallas Fed, opines that a sharp acceleration of inflation is unlikely because there continues to be slack in the economy, the US deficit has predominantly been financed without creating new money, and labor costs remain under pressure.

Even the skeptical Bernanke watcher, James Grant, had to agree last week writing in his Grant's Interest Rate Observer that despite his own "remonstrances and forecasts" to the contrary, real deflation (which he describes lightly as a combination of falling prices and bank failures) "might be what's on tap" for now

The problem is nobody knows what's on tap for later. The permanently pessimistic Fed governor Charles Plosser sees inflation "subdued in the near term," and he expects it to accelerate to only 2-2.5% in 2011. But, as he noted in his June 11 speech before the egg and toast crowd at the Blair County Pennsylvania Chamber of Commerce, "the key to keeping inflation expectations well anchored and prices stable is for monetary policymakers to carefully communicate and implement an exit strategy from the very accommodative monetary policy now in place."

What's keeping inflation worries on the front burner is the widespread disbelief that the United States and other stimulus-addicted governments possess the fortitude necessary to take the punch bowl away. An April Gallup poll found that 55% of Americans were "very concerned" about climbing inflation, while a June Bloomberg National Poll found about the same percentage believed the deficit was "dangerously out of control."

The Congressional Budget Office says that the federal debt should hit 62% of GDP by 2010;it projects it to surge to 185% by 2035 if planned spending is realized. And the U.S. is not alone in nearing the breaking point. In May, the IMF estimated that the average general government gross debt ratio of advanced economies, "which has already ballooned by close to 20% of GDP since the onset of the crisis" will "rise by a further 20 percentage points by 2015, reaching about 110% of GDP."

To say this is unsustainable would be charitable. But who wants to be the first politician to pull the plug? In a July interview with Charlie Rose, Treasury Secretary Timothy Geithner said that the Treasury markets were not pushing the U.S. to take its medicine now, because everyone knows the government plans to tackle the deficit. "[T]here is a lot of confidence, not just of Americans but investors around the world, that we're going to find the political way to do it," Geithner said. "There's no alternative for us. We'll be able to do that."

But jawboning does not make it so. That's why gold-bugs are jumping and why there is still plenty of talk about "Helicopter Ben" -- a reference to Bernanke's belief that deflation can always be solved by flipping the switch on the government printing press, which allows the government "to produce as many U.S. dollars as it wishes at no cost."

The printing press can also come in handy when dealing with unsustainable debt, if the debt is in your own currency. Looking at the United States' "debt trap" in a February market letter, Marc Faber, the prescient Swiss financier commonly known as Mr. Gloom Boom Doom, laid out the government's problem succinctly. With tax receipts down and radical spending cuts seeming off the table, the United States has only two avenues of escape -- default or reduce the debt by inflating it away. Faber is betting the United States will ultimately take the Weimar route and turn on the presses.

The pain will eventually come, and when it arrives there is nowhere for the average citizen to hide. Such as it always was, Parsson might have added.

"Since those dim beginnings in the forests of the Stone Age, governments have been perpetually rediscovering first the splendors and later the woes of inflation," he writes. "Nations can always clearly see objectives they would like to reach, such as fighting wars or being prosperous, and they are often willing to spend whatever is necessary to reach them. They are not often so willing to pay up."

Is deflation the problem that will throw us into a depression?
Subscribe to Fortune
First Published: August 2, 2010: 9:26 AM ET