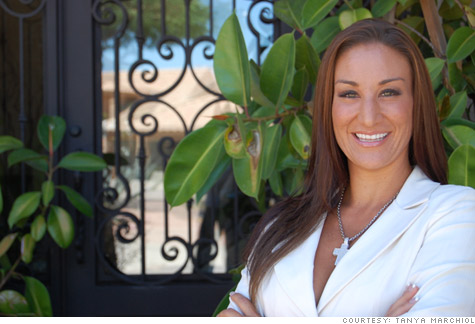 "It's awesome right now. I don't think we'll ever see another time like this," said Tanya Marchiol of Team Investments, which has operations in about 10 states but focuses mostly on the Phoenix market.

These investors are known to many as vultures because they swoop in and buy "distressed properties" -- foreclosures and short sales -- cheap. Places like Las Vegas, Phoenix and Miami are popular because home prices there have dropped as much as 70%.

But how they're investing has changed. In the boom years, they would buy a property and flip it for a quick cash out. Today, they are holding and renting for hefty, steady incomes.

Once they analyzed their decisions based on home-price appreciation, which is very speculative. Now they consider potential rental profits, which is far more stable.

Back then, they flipped often and helped to bid up home prices into a froth. Now, the investors say, they can be a part of stabilizing neighborhoods.

"People are not in it to flip like back in the old economy," said Matt Martinez, an investor and author whose new book, "How to Make Money in Real Estate in the New Economy" comes out next February. "The new economy dictates that you have to have a long time horizon."

Marchiol, for example, does not even factor in home price appreciation for at least a year. After that, she calculates only a 3% annual increase -- a return that won't turn heads of investors who only want to buy low and sell high.

Marchiol just purchased four separate four-plexes in North Phoenix. Three years ago, each four-unit building sold for $310,000; she paid just $70,000 per building. She intends to spend about $64,000 rehabbing the properties, making her total investment $344,000.

In total, she currently owns about 17 rental units. Usually she buys the properties to keep herself, but she also works with a group of investors who are intent on holding them and renting them out. She can spot the deals and then sell to them.

For example, with her North Phoenix buildings, the investors will buy the buildings for $95,000 each. They'll put 20% down and finance the rest, about $76,000 per building.

At today's low interest rates, they'll get a near 5% loan. That yields a payment of about $400 a month. Figure another 10% of the price for property management, 10% for maintenance, an 8% vacancy rate, taxes, insurance and other home ownership expenses, and you're talking about a monthly nut of roughly $1,300.

Although conditions are very favorable, investors have to be adaptable because the market is evolving rapidly. In Phoenix it's changed in just the past six months. Foreclosure auctions are no longer a fertile hunting ground for Marchiol.

"Amateurs have come in and run up the prices," she said. "In 2009 I bought 76 properties at foreclosure auctions, at an average of about 60 cents on the market dollar. This year, I've bought four."

Glenn Plantone faces a similar situation in Las Vegas. A veteran real estate broker and investor, he has switched from buying mostly foreclosures and repossessions to short sales almost exclusively. That's because the inventory of distressed properties available in Vegas is way down, to about a two-week supply.

"The banks make better profits with short sales, so they're not foreclosing," Plantone said. "They've switched staff to processing short sales and they've gotten faster at processing them."

He tries to purchase properties for at least 10% less than what he considers to be true market value, then he does some light rehabilitation and sells them to some of the 3,000 buyers he works with.

Since prices have fallen about 70% in some Vegas communities and rents have only declined by about 20%, it's possible for his investors, who are cash buyers, to make money from the first month the homes are rented.

He doesn't completely ignore potential profits from home price appreciation because he believes the town is bouncing around the bottom. (Homes already sell for below what it would cost to build new homes.) He does not, however, emphasize that aspect of the investment.

It's the income from rentals that's paramount right now.

The beauty of cash flow, of course, is that even if the prices decline another 10% or 20%, the investors should be able to live with that.

"I tell them to plan on holding for five years," he said. "With cash flow, there's no need to worry about price drops."