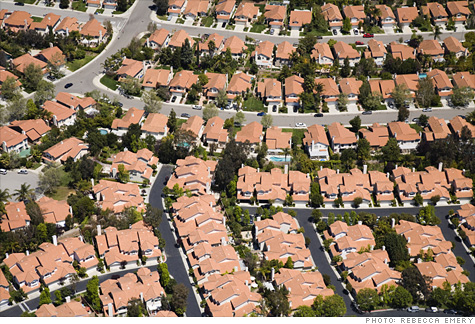 FORTUNE -- It appears even the bright spots of this tired economy are still working against heavily indebted homeowners. Mortgage rates have hit new lows nearly every week, but many borrowers are still unable to take advantage of them.

Like it is in so many parts of today's sideways economy, relief is out of reach. Stimulus dollars are everywhere, but somehow never where they're needed most.

Last week, U.S. mortgage rates fell for the eighth consecutive week to a record low after the Federal Reserve said it would buy more government debt to help the economy recover. A 30-year fixed-rate mortgage in the week ending Thursday dropped to 4.44% from 4.49%, according to Freddie Mac, which noted it was the lowest since the mortgage finance company began collecting data in 1971. The 15-year rate averaged 3.92%.

The fall in rates ostensibly means homeowners can lower their monthly loan payments by refinancing their existing loans. They're certainly trying -- the Mortgage Bankers Association reported last week that 78.1% of all mortgage applications fell under the refinance category, up from 58.7% in April.

But many of them are filling out all that paperwork only to get a rejection letter in response. The mortgage association does not quantify how many of those who apply for refinance actually get approved, but mortgage brokers say many homeowners are ineligible. Last year the Home Affordable Refinance Program, or HARP, was created to help homeowners get new loans, but the program has only resulted in a small fraction of the refinancings the government aimed to enable.

"The qualifications are so much stricter," says Dale Robyn Siegel, CEO of Harrison, NY-based Circle Mortgage Group and author of The New Rules for Mortgages. "Banks have realized that even the best of borrowers have lost their jobs. A lot of people are really tapped out."

The stricter qualifications include a higher FICO score of at least 620, a higher down payment and lower monthly debt service ratios. Additionally, lenders typically won't loan more than the appraised value of a home. The troubled housing market has left an estimated 15 million U.S. mortgages -- one in five -- worth more than the value of the homes they helped purchase. The growing mountains of paperwork required and higher bank fees have also discouraged some from refinancing.

The government-controlled Freddie Mac (FRE, Fortune 500) and Fannie Mae (FNM, Fortune 500) either own or guarantee half of the nation's mortgages. Wall Street economists and analysts have called on the Feds to loosen lending standards and give breaks on fees so that more people qualify to refinance. In the short-term, this could free up household incomes and inject much-needed money into a slow-growing economy. But opponents argue it would only add to the hundreds of billions of dollars it will take to prop up troubled Fannie and Freddie.

It's easy argue against the idea of helping homeowners -- even the debt-ridden and jobless -- with their bills. After all, it can be said they bought too much house for their own good and bailing them out would only encourage the kind of irresponsible borrowing that sent the US economy into a financial crisis in the first place.

But lower interest rates, ideally, are meant to encourage investments - something the economy could use right about now. Instead, today's mortgage rates are doing nothing more than tempting those investors who can't have them.