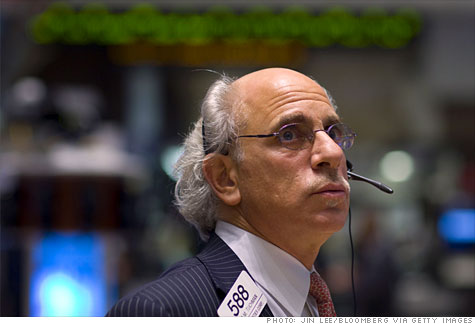 FORTUNE -- Investors lined up around the block last week to get a piece of Johnson & Johnson's newest debt offerings, even though the yields were small enough to fit on a Q-tip. Ditto for new debt from IBM, Wal-Mart and a host of other investment-grade corporations.

That goes a long way to explaining why investors would rather snap up Johnson & Johnson 2.95% ten-year notes, which yields just 0.43 percentage points more than the comparable Treasury note, and not JNJ stock, with a dividend yielding 3.69%. Or why they like IBM 3-year 1% notes, priced at just 0.30 percentage points over the comparable Treasury, rather than IBM stock with a dividend yield of 2%. Stocks remain the loose cannon at the party -- no one is sure whether they're going to buy everyone another round, or wind up in a corner, flash crashing. Few investors are particularly willing right now to invite that kind of risk into their portfolio.

"Only three months ago we thought the world was coming to an end," says David Trahan, managing director and head of investment grade syndicate for Citi Institutional Clients Group. He ticks off the worries: the near-death experience in Greece, then Spain; the surprise SEC suit against Goldman Sachs; the financial regulatory overhaul bill; mounting fears of a double-dip recession. In response, investors began demanding bigger yield concessions on all corporate bonds. Fear hasn't ebbed in recent weeks, but investor attitudes have shifted. They appear to be more nervous than ever about the economy and the markets - queasier than they were 18 months ago -- but they have also decided that Blue Chip companies will carry on just fine, says Trahan. And that is helping to drive corporate bond spreads closer to dwindling Treasury yields, which is pretty unusual.

"I wouldn't be surprised if someday JNJ trades at a spread below Treasurys," says Jack Ablin, Chief Investment Officer, Harris Private Bank. In other words, Johnson and Johnson yields could dip below the so-called risk-free yield on government debt. Corporate yields haven't been routinely lower than Treasurys since the Great Depression.

Bonds just don't have the same "ugly" downside as stocks, Ablin observes. Deflation, double-dip recession - those may be low probability outcomes, but the ramifications could be devastating if any of those scenarios play out. "It's as if we're driving around on our spare tire. We've changed the flat. If we get another flat, we're stuck."

Stuck is not a good place to be. And it's something that Fed Chairman Ben Bernanke considered long before the credit bubble burst three years ago.

In a 2002 speech streaking across the Internet, Bernanke (then only a Fed governor) took a hypothetical look at how the central bank should handle the threat of deflation - falling prices - when short-term rates are basically at zero - just as they are now. Bernanke turns to a bit of Fed history and recalls that until 1951, "the Fed maintained a ceiling of 2-1/2 percent on long-term Treasury bonds for nearly a decade." David Rosenberg, economist extraordinaire and leading bond bull infers from the speech that Bernanke has the will and the intellectual framework to drive down long-term bond rates even further, which would translate into higher prices. "With that in mind, the case for more bond buying is actually pretty strong. And, if we do end up going to 2.5% on the long bond with the help of Helicopter Ben, that would imply a total return of well over 30%," Rosenberg writes in his August 12 daily note.

This could be the golden age for bond investing

Technical factors are also on the side of the bond market - both investment grade and high yield. Mom and Pop are pouring cash into bond funds, which need to be put to work. The trend began last year, much to the benefit of the top-of-the-line credits. The market turned euphoric, says Citi's Trahan. Asset managers of every stripe wanted to buy investment grade credits: equity investors, mortgage investors, agency investors, high yield - demand was easily five times the demand of today's deals, which are strong but much more narrowly driven by core corporate bond investors. No wonder. Yields were twice as high for household names. Consider this: Back in 2008, lucky investors picked up 5-year IBM notes for a yield of 6.584%, 3.875 percentage points over the 5-year Treasury, then yielding 2.709%. That same year IBM sold 30-year bonds for nearly 8.1%, or four percentage points over the Treasury. That's practically a fire sale.

Today the investors have splintered into different market sectors, balancing their fears and needs. One major asset manager walks that tightrope by looking for pricing inefficiencies. Some managers are stuck buying the expensive bonds because they've promised to invest in specific tiers within the credit rating system, this major investor says. He has no need for the credit rating agencies but prefers to rely on his own formidable research department to ferret out value, typically in the higher end of the junk bond market, which by some measures is still relatively cheap. And, indeed, that market now smacks of euphoria. Dealogic reports that weekly high yield issuance hit a record $15.4 billion last week and is on track for a scorching year. Year to date issuance totals $155.5 billion, close to the all-time annual record of $163.57 billion set last year, according to Dealogic.

The bond market is long the traditional home for aging savers, not traders. "We generally buy bonds to match cash flows, not for real, pure investments," says Jack Ablin of Harris Private Bank. "We do it for maturity matches so that the day investors need to write the check" the money is there for them.

And that could explain the peculiar development in the five-year Treasury Inflation-Protected Securities. Last week the TIPS were trading at a slightly negative yield. You read that correctly. The yield is negative, which has happened in the past - in 2008 to precise. "That doesn't seem to peacefully co-exist with the deflationary scenario," says Ablin. But it is part of the no-more-tears investing practices of many professionals. In fact, some are saying it's the ultimate anti-inflationary, protect-your-back investment. Although deflation is the front-burner worry for most investors now, inflation worries are not far behind. Warren Buffett recently said that he was reducing his long-term fixed-income investments to protect against inflation. TIPS are for the inflationistas who don't care much about the real interest rate, but who are concerned about return of principal on an inflation-adjusted level. So if the U.S. economy suddenly goes Weimar, investors in TIPS will feel confident that they get back enough cash to pay the rent and buy food because at the very least, they should get back the buying power of their original investment.

To be sure, there are voices out there saying all of these strategies could go wrong: interest rates could rise and the prices on the blue chip bonds would tumble; or that corporate issuers could crumple if the economy gets really ugly. Or that you certainly won't make money on any of those things; the prices are simply too high. Or that there's no such thing as a no-more-tears trade just as it turns out there was no such thing as a risk-free mortgage investment.

But investors will continue to seek a home for their hard-earned cash, for a safe haven from the volatility of stocks. We should all start to really worry when investors decide the mattress is the safest place of all.