A hedge fund pioneer looks at 30 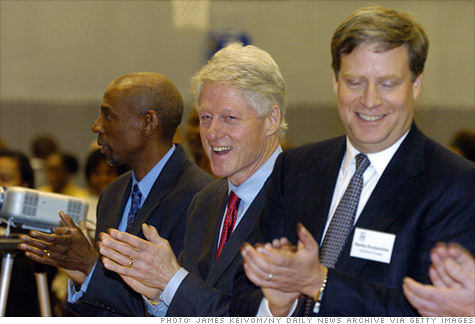 Former President Bill Clinton applauds before speaking at the unveiling of the headquarters of the Harlem Children's Zone. With him are HCZ President and CEO Geoffrey Canada (left) and HCZ Chairman and Secretary Stanley Druckenmiller. By Keith McCullough, contributorAugust 19, 2010: 4:19 PM ET

FORTUNE -- "You need to be decisive, open-minded, flexible, and competitive." --Stanley Druckenmiller

The hedge fund profession that I and many others ply in saw one of its all-time greats retire yesterday. Stan Druckenmiller, founder of Duquesne Capital Management was, as one of his good friends told me, one of the best at this game because "when he knew he was going to be right, he just spread his wings."

The most consistent hedge fund managers in this game are very matter of fact and common sense people. They have their own repeatable risk management process. They are as competitive as a professional athlete in executing it. And they are mentally flexible enough to change their positioning as the game changes.

Druckenmiller likes to look at charts. I have a beauty that's taped on the inside of my notebook that I often show clients to depict the correlation between hedge fund strategies going back to the early 1990's. I use the early 90's because that's when we started to see the divergence between the real pros in this business and the also-rans in the hedge fund world who simply chase one another's positions.

This chart (use your imagination) demonstrates one very obvious fact: hedge funds used to have very low correlations to one another (0.3 in 1993) and now they have very high correlations to one another (averaging between 0.7-0.8 from 2007-2009). Therefore, you should invest with those hedge fund managers that can generate absolute returns in down markets.

In the down year of 2008, Druckenmiller was +11%. That says a lot about the independence and flexibility of his strategy.

From our skunk-works of chaos theory here at Hedgeye in New Haven, CT, here are some deep simplicities associated with hedge funds that manage to consistently drive absolute returns across bull and bear markets:

1) Hedge funds that consistently find alpha in their idea generation.

2) Hedge funds that maximize that alpha (spreading their wings) when they find it.

What a fund manager is not to do: run a fund's assets at 140% net long and cut net exposure to 107% when upon realizing it's a bear market. That's not hedging. That's called being levered long. The nascent history of this industry has shown plenty of real pros end up feeling silly and exposed when they go there.

Another way that a real pro can start having performance issues is when they miss a big macro move. On top of the statistical reality that there are upwards of 10,000 hedge funds trading their gross and net exposures in a highly correlated way, the institutionalization of asset management drives fund flows to the same places When the macro wind moves from bullish to bearish, fund managers need to be flexible.

Going back to 1993, when the fund ecosystem was more wild and woolly, the percentage of the US market controlled by "institutional investors" was running just inside of 45%. Today, that number is running closer to 65-70%, and there is an intense amount of pressure for asset managers to be fully invested -- having a very low position in cash as a percentage of assets under management. After all, the art of managing money is actually having money to manage, so asset managers need to feed the beast. Just because the pressure is on fund managers to do this doesn't mean it's the right way to run a fund.

If you look at the cash positions in US Equity Mutual Funds today versus the early 1990's, the chart may or may not shock you. Cash as a percentage of assets under management has plummeted from 13% in 1991 to less than 4% today, and that number is likely to keep heading downwards.

Another pressure comes from long only investors chasing relative performance on a monthly basis while levered long funds (disguised as hedge funds) chase them daily and weekly. Asset managers who are open-minded and flexible -- and not afraid to reallocate into cash when it makes the most sense --- are going to continue to deliver to their clients what they really want: Not losing their money.

I wake up every day with one risk management goal in my head - don't lose Hedgeye's clients any money. Maybe I should have been a goalie - or maybe I should have submitted my resume to a pro like Druckenmiller who could have taught me how to spread my wings when I get the hot hand.

Our cash position in the Hedgeye Asset Allocation model is currently 61%. When we were bullish in August of 2009 it was 23%. We remain a short seller of both the US Dollar (UUP) and the SP500 (SPY) on strength and our best long ideas in global equities remain Utilities (XLU), Brazil (EWZ), and Indonesia (IDX).

Enjoy time with your family and friends Mr. Druckenmiller. Your world class risk management performance will be missed, but never forgotten.

-- Keith R. McCullough is CEO of Hedgeye, a research firm based in New Haven, Conn. The opinions expressed in this column are his own.

Why these billionaires are pledging away their wealth
Subscribe to Fortune
First Published: August 19, 2010: 3:55 PM ET