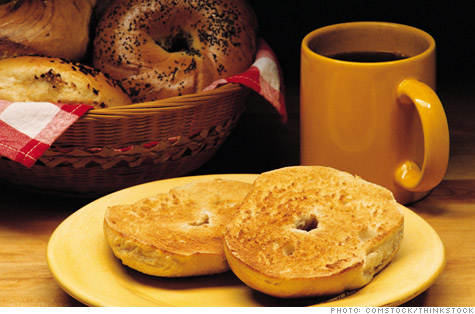 NEW YORK (CNNMoney.com) -- Any way you slice your bagel, if you slice it in New York, it's going to cost you more.

New York State tax officials are enforcing a sales tax for sliced or prepared bagels (with cream cheese or other toppings), along with whole bagels eaten in the store, according to the state Department of Taxation and Finance.

Whole bagels sold for takeout are not subject to sales tax, but "any handling or preparation at the shop turns it into a taxable event," says Brad Maione, a spokesperson for the DTF.

Although Maione says the sales tax is not a new provision and that the stepped up enforcement is due to better technology, bagel-store owners say the tax was news to them.

Kenneth Green, the owner of 33 Bruegger's Bagel franchises throughout New York, says he never charged patrons the bagel tax and says he found out he owed back taxes this summer when the state audited his company.

"We think it's unfair. They audited us four times in the past 20 years and never raised this before. We are a law abiding company and tax payers. They are requiring us to pay three years worth of taxes we never collected," said Greene.

The tax on a sliced bagel is roughly 8 cents. Greene estimated that because of the audit he'll have to pay thousands in back taxes.

Why the spike in bagel audits? Skeptics say it isn't new technology or better methodology, they say it's because New York state is broke.

"I think it's the way the state gets more money. I didn't expect that slicing a bagel would require taxing," said Linda Wilpon, owner of Ess-a-bagel.

This all comes at a bad time for small businesses struggling to hold on during the recession, according to Tad DeHaven, a budget analyst at The Cato Institute.

"Instead of thinking what can be done to encourage small business owners, they are wasting their time and taxpayer money, harassing job creators to fund the state budget," he said.

And the tax code seems unclear. A sliced bagel gets taxed are but sliced bread at a bakery apparently isn't.