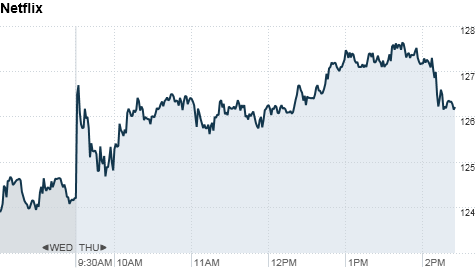 "Apple has changed the game for mobile devices," Reed Hastings, Netflix co-founder and chief executive officer, said in a statement.

The shows can be streamed over both Wi-Fi and 3G networks, and they are organized based on members' personal preferences, genres, new arrivals and individual instant queues.

Netflix (NFLX) shares gained 1.3% to end at $125.84 on Thursday. The stock has been on steady upward streak this year, crossing $100 for the first time in April after the company reported a blowout first quarter.

"Netflix Android" was a trending Google search on Thursday, and Twitter users were also grumbling about when the app would be available for their Android phones.

But Netflix is already available beyond the standard television. Video game consoles such as the Nintendo Wii let users stream to their TVs, and an iPad app has been around since April.

Netflix has been working to expand its reach as its competitors, includingCoinstar's (CSTR) Redbox and Wal-Mart (WMT, Fortune 500), also look to add streaming services down the road, and HBO, Hulu and Apple's iTunes build their online content.