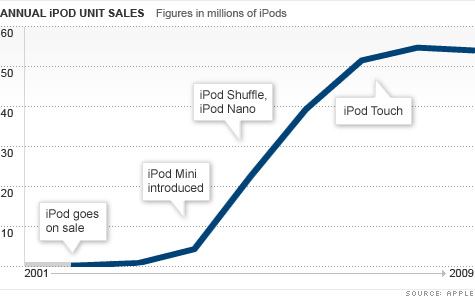 NEW YORK (CNNMoney.com) -- The iPod helped Apple rise from the dead in the last decade. But the iPod Classic, the device that jump-started that resurrection, didn't get so much as a mention from Steve Jobs at Apple's iPod event on Wednesday.

Apple's decision to completely ignore the iPod Classic means that 2010 will be the first year in the iPod's nine-year history in which the Classic doesn't get even a slight upgrade. That fueled another round of what has become an annual tradition: rumors that Apple will completely do away with the iPod Classic once it sells through its inventory.

Its obvious omission from Jobs' presentation spooked the device's devotees. On MacRumors' forums, commenters grumbled about the "kick to the teeth" to Classic fans of Jobs' showing off upgrades to all of Apple's iPods except the original.

"I guess it's not part of the club anymore," one fan lamented.

A spokesman from Apple (AAPL, Fortune 500) did not immediately return requests for comment. For now, the Classic is still available through Apple's online store and other sales channels.

Some minor tweaks aside, the iPod Classic has basically been the same since October 2005. Sure, it's aluminum now instead of plastic, it has a slightly bigger screen plus lots more memory and battery life, and its menus have been improved. But the Classic hasn't gotten a major upgrade since video playback was introduced five years ago.

The rest of the iPod line has left it lagging way behind on the evolutionary curve. The Shuffle may lack a screen, but it's as big as your thumbnail. The Touch is essentially an iPhone without a contract. Even the Nano has a touch screen now. The Classic is the last iPod with a hard drive and a click wheel.

But the iPod Classic has one killer advantage: It features an amazing 160 GB of space for music, which is enough for 40,000 songs.

And that's 16,000 songs if you don't fill it up with anything else. The iPod Touch's memory is typically crammed with apps and high definition video, which aren't exactly small files.

"Apple has a reputation of being arrogant, but by keeping the iPod Classic as it is, Steve Jobs isn't rocking the boat or ruffling the features of the users that like it," said Laura DiDio, principal analyst at ITIC. "Apple is playing to all levels of its user base. I don't think it's going anywhere soon."

It's worth noting that the iPod Classic was never the primary driver of the iPod and iTunes revolution that garnered Apple its whopping 70% share of the mobile media player market.

It wasn't until the January 2004 debut of the more affordable iPod Mini that iPod sales really took off. In 2002, the iPod's first full year of availability, Apple sold 381,000 units. That's not bad, but it's peanuts compared to the 54 million iPods Apple sold last year.

Would Apple kill off a device that still has a cult following? Maybe. The company likes to push its customers to stay on technology's cutting edge -- and sometimes, its innovations take it a step too far.

A good example is the third-generation iPod Shuffle. Apple did away with the buttons, replacing them with a confusing control pad on the headphones and sparking a backlash. But to Apple's credit, it listened to its customers' complaints about the switch: Jobs noted this week that people "clearly liked the buttons," and Apple put the controls back on the actual device in the fourth-generation version that will go on sale later this month.

Listening to customers' feedback and trying not to alienate its core user base are two reasons why some analysts think Apple has chosen to hang onto the Classic for so long and will continue to sell it -- at least until Jobs gets on stage to debut next year's new iPod line.