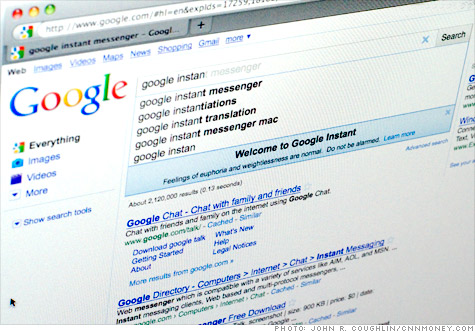 NEW YORK (CNNMoney.com) -- One of the Internet's most iconic images -- Google's search screen -- is being overhauled.

On Wednesday the company launched Google Instant, a live-updating service that aims to shave seconds off the typical search time. The update began hitting users' computers about an hour before a scheduled Google press event to unveil the change.

Now, when users search Google, the results are refined in real time as more keywords are added. The search box jumps to the top of the search page and results appear in a constantly changing list. Users can select the right site if it catches their eye before they finish typing.

Google predicts Instant can save 2-5 seconds on a typical search, which now averages 9 seconds. The update will be available on Google's Chrome 5 and 6, Firefox 3, Safari 5 for Mac and Internet Explorer 8.

"Welcome to Google Instant," a blue box tells users. "Feelings of weightlessness and euphoria are normal. Do not be alarmed."

The box links to an announcement from Google, which says it is "pushing the limits of our technology and infrastructure" to make search faster. Search result rankings will remain the same.

"People type slowly, but read quickly, typically taking 300 milliseconds between keystrokes, but only 30 milliseconds (a tenth of the time!) to glance at another part of the page," Google wrote. "This means that you can scan a results page while you type."

Google reads your mind: "There's a psychic element to it," Marissa Mayer, Google's vice president of search product and user experience, said at the launch event at San Francisco's Museum of Modern Art. "We can predict what you're likely to type."

Mayer joked about an old Google April Fool's Day gag, in which the company said "Google Mentalplex" would figure out what users wanted before they typed it.

In her demonstration, Mayer noted that Google Instant shows in black the text the user typed, while "the prediction" text appears in gray.

Google foreshadowed that change Wednesday morning with a new Google doodle that changed from gray to color as a user typed. It followed an interactive doodle on Tuesday that Google called "fast, fun and interactive, just the way we think search should be."

Google's goal is to get users to the right content "much faster than before," so that they they don't have to finish typing fill search terms, or even click the "search" button, to see results.

"In time, we may wonder how search ever worked in any other way," Google (GOOG, Fortune 500) said.

More than a decade after its now-famous search engine launched, Google is determined to keep its core technology fresh. The company has made 500 changes to its search engine so far in 2010, Mayer said. More than 1 billion users now visit the site each week.

But if any of them don't like the new look, they can turn it off -- a button next to the search box offers that option.

Google Instant isn't yet available on mobile devices, but the company plans to release it soon.

Google reveals how it will make money on Maps