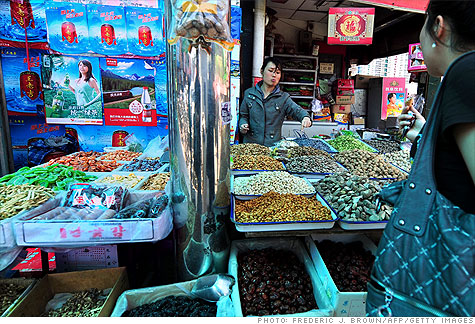 The consumer price index increased to 3.5% in August, compared to a 3.3% annual rate in July, China's National Bureau of Statistics reported on Saturday.

The global economy has become increasingly dependent on China's rapid expansion as an engine for growth.

But prices in the fast-growing Chinese economy have been outpacing most western economies; U.S. prices were up only 1.2% over the 12 months ending in July.

That has raised some concerns that the Chinese government might take steps to slow down growth in order to keep prices in check.

"China has to be careful," said Robert Brusca of FAO Economics. "Their big objective is domestic stability, and domestic stability requires employment. But they can't let inflation get away from them. So they have a tiger by the tail."

The increases in Chinese consumer prices have been driven by higher food prices, up 7.5% in the last 12 months. Food makes up about a third of the overall consumer price index in China, compared to only 14% of the official mix of prices in the United States. Fresh vegetables have shot up 7.7% in the last month and further price increases are expected due to a poor wheat harvest in Russia.

There is little the Chinese policymakers can do to control food prices other than provide subsidies, said Virendra Singh, director in international economics for Moody's Economy.com.

But he said there is concern that rising food prices could spill over to the rest of the economy as workers demand higher wages.

So his firm is expecting the People's Bank of China to move soon to raise interest rates.

In fact, the August price report got particular attention when China moved up the release of the data by two days, prompting some to speculate the move was done to give financial markets a chance to digest the news and possibly pave the way for the People's Bank of Chinato raise interest rates.

But Jay Bryson, international economist for Wells Fargo Securities, isn't convinced China is getting ready to raise rates because of uncertainty about the strength of the global economic recovery. And he said even if it does raise rates, the impact will be more symbolic than substantial.

"The Chinese have always had a bias toward growth rather than keeping inflation in check," he said. "[A rate hike] could send a signal that these guys are getting serious about inflation."

The Chinese central bank has left rates unchanged since September 2008 when it cut rates in the face of the global financial meltdown.

There isn't an overnight lending rate in China comparable to the U.S. Federal Reserve's benchmark fed funds rate, which has been near 0% since December 2008.

By comparison, the People Bank of China's one-year lending rate has been at 5.31%, but that relatively lofty rate has done little to slow the economy overall.

China's gross domestic product, the broadest measure of the economy, was up 10.3% in the second quarter compared to a year earlier.